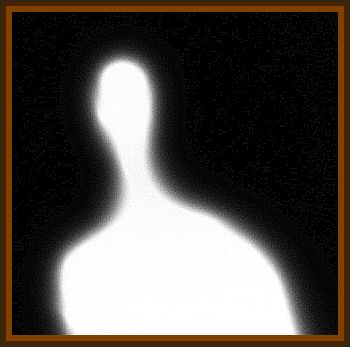 UFOs have long been supposed to show a particular interest in military installations.

Ufologists often speculate that they are keeping tabs on our ability to defend ourselves against alien invasion.

However, the unearthly entity that materialized at a Spanish Air Force base one night seemed to have no purpose in visiting other than to terrify the base personnel. Did the witnesses experience a shared hallucination triggered by the stress of their duties? Or had they fallen prey to a bizarre form of psychological warfare, whether alien or terrestrial?

At 1:45 a.m. a pair of sentries on guard at the Talavera la Real Air Force base heard a high pitched whistling sound. They ran outside to investigate and saw a bright light hovering overhead. A third soldier joined them as they began searching the fuel stockpiles for signs of sabotage.

Although they found no evidence of a break in, they felt a sudden whirlwind and heard twigs breaking in a clump of nearby eucalyptus bushes. They sent their Alsatian into the bushes to flush out anyone hiding there. Seconds later, it staggered back, whimpering and covering its ears.

A glowing green mass suddenly materialised and formed itself into an incomplete 9' tall figure. It was wearing a spacesuit and had a human looking face, but lacked the lower half of its arms and legs.

One of the guards raised his machine gun to fire at the intruder, but instead dropped to the ground paralysed. Down. They will kill us! he yelled manically.

The other 2 soldiers managed to fire several rounds into the entity, which vanished in a blinding flash of light.

The next morning, the area was thoroughly combed for evidence. Although some of the base personnel had heard gunfire at the time of the incident, they were unable to find any spent bullet casings at the scene. Nor was there any sign of damage to the wall that the entity had materialised in front of.

The authorities concluded that shots had been fired, but refused to speculate any further about what the soldiers had actually been firing at.