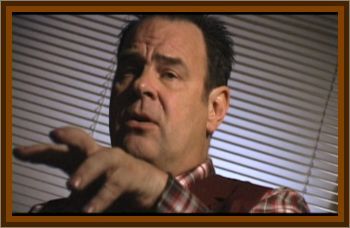 Actor and UFO and paranormal researcher Dan Aykroyd, who recounted his MIB story in a documentary on UFOs. While he was in New York City preparing a show for the SyFy Channel (I stopped watching that channel when they switched from SciFi to SyFy), on UFOs and paranormal.

He was having a cellphone conversation with Brittany Spears about being on Saturday Night Live, and noticed some guys in black suits standing next to a black sedan. One MIB stood outside the car staring at Aykroyd, and another gave Aykroyd an unpleasant glance from the back seat. Aykroyd looked away for a brief moment, and when he looked back, the sedan had disappeared. And that car did not go past me, it did not take a U-turn. That car vanished, said Aykroyd.

Aykroyd was informed later that day that his show was to be canceled, leaving many ufologists to ponder whether or not MIB influence led to that outcome.