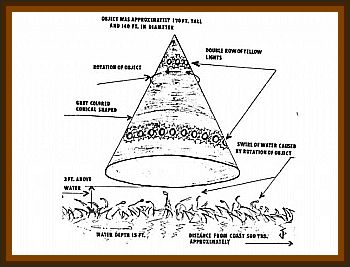 The fishing boat Moguer 5 left port at Ayamonte, Huelva, Spain and proceeded out to sea.

6 other boats comprised the rest of a small fishing fleet. The Moguer 5 was 1200' from the shore when a conical shaped object was seen 300' farther out to sea, hovering over the water’s surface.

The object was first spotted by Eugenio Burgo Gomez, who called the attention of his crewmates and thereafter, the crews of the other boats.

The description of the surrounding area follows:

The Ayamonte area has a permanent population of about 8,000 people and the local industry includes fishing and sea salt mining. The population swells to about 100,000 in the summer due to a flourishing tourism business.

In the surrounding area are the Guadiana, Odiel, Tinto, Piedras, Lagunas del Portil, Lagunas de los Barreros, Prima de Palos and Laguna de las Madres rivers. It is popularly called the zone of the swamps. A biological reserve named Donana Park is located in the area also. Close by are the Rota and Cadiz Army Bases, the La Parra Air Base, and there is ordinarily considerable aircraft, including helicopters, and warship activity.

However, at the time of the sighting there were none observed by the witnesses.

The physical and weather conditions were as follows:

On the shore off which the sighting took place is El Rompido camping ground, which was largely unoccupied as it was off season. The depth of the sea was 14', and weather was good with no clouds and good visibility.

The Moguer 5 is equipped with a 130 horsepower engine, a sounder, magnetic compass and radio, none of which showed any indication of being affected by the presence of the object. The vessel’s bearing was 000, it’s speed 05'. There was a slight sea swell.

The conical, gray object was situated approximately 3' 3" above the surface of the sea and was revolving around itself in a clockwise direction. There were 2 rows of yellowish lights, one near the top of the cone, and the other near the bottom.

The depth of the water at the point where the object hovered is 16' according to nautical charts.

The object made no sound, gave off no vapor or trail, but did appear to cause a disturbance of the water directly under it. It was estimated by the witnesses to be 140' approximately in diameter at its base, and about 170' high.

The witnesses watched the cone for 20 minutes while it rotated, no figures available concerning rate of rotation, just above the sea’s surface for 20 minutes at which time it rose vertically and disappeared into the sky.