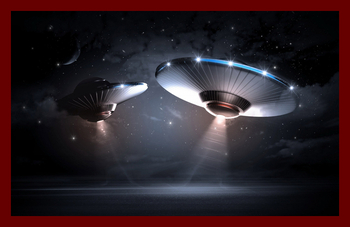 Nobody can say 2020 has been a normal year: The coronavirus pandemic, cancelation of many college and professional sports, social justice protests and an active Atlantic hurricane season, just to name a few things.

While UFO Awareness Day was observed, every day seems to bring reports of strange celestial sightings.

Witness accounts from Virginia and indicate there's plenty to see in the heavens, even though the state doesn't rank among the most numerous for sightings.

The National UFO Reporting Center has hundreds of reports of unidentified flying objects, piquing the curiosity of folks fascinated by the possibility that we're not alone here on Earth, and aliens from another galaxy are circling the planet in strange looking spacecraft.

So far, 1,846 UFO reports have been filed from Virginia, plus 85 from the District of Columbia, according to the National UFO Reporting Center.

Some of the more interesting ones include:

A report from August 3 in the Stafford area said fast moving objects were seen.

My daughter and I were videoing crazy clouds in a storm that was rolling in and caught something we cannot identify. It looked like possibly 3 or 4 different objects. One flew behind the cloud and the others in front.

An August 2 report from Woodbridge said 14 to 24 white/orange lights flew in formation:

They turned and headed north and back to the west and disappeared. They were all illuminated in white to a pink color and made no sound at all. At the point that they turned back west I could see another craft with green blinking lights coming from the north, higher then the crafts and down to where the crafts started turning back to the west. Then they all just disappeared.

I retired from the Army with 32 years, active and reserve, and I have never seen an craft like this with no sound at all.

A report from the Virginia Beach on July 5 said:

My husband and I were driving down the interstate in Virginia Beach and we saw what looked like an airplane.. I joked with him and said:

Next thing we knew it grew smaller within a matter of seconds and it was gone. It got smaller as in it looked like it went further in the distance. Also as soon as it disappeared my phone stopped working for approximately 5 minutes. No plane could move that fast. Very strange.

And a report from the evening of February 4 described fighter planes as they chased a light over the Washington, D.C., area:

I was awakened to a sound of fighter planes overhead. I live right next to the Pentagon in a high rise. I have not heard fighter planes since 9/11. The noises were very loud rising and falling as the planes went overhead.

I stepped out on my 16th floor balcony and could see 2 faint white lights moving in a circular pattern overhead. I could not see the fighter plane or planes, but could see these lights. One disappeared, but the other moved in a S shaped pattern and circled back, it did not happen to any other lights on it. Just a single white light.

The notion of intergalactic travel got a boost when information emerged from the Advanced Aerospace Threat Identification Program, a shadowy $22 million Defense Department program that began in 2007 to investigate unidentified aerial phenomena. The multi year program was shut down in 2012, but the Pentagon released UFO videos earlier this year.

The Pentagon acknowledged the secret program to investigate UFO sightings in 2017, the same year as retired naval Cmdr. David Fravor dramatically recalled a confounding encounter with a UFO when he was conducting a training mission off the coast of California in 2004.

The wingless oblong craft about 40' long was flying erratically through his airspace at incredible speed, maneuvering in a way that defies accepted principles of aerodynamics. Fravor didn't know what to make of it, but said it was not like anything he had ever seen in nearly 20 years of flying.

He described the UFO as other worldly.

I can tell you, I think it was not from this world, Fravor told ABC News. I'm not crazy, haven't been drinking. It was, after 18 years of flying, I've seen pretty much about everything that I can see in that realm, and this was nothing close.