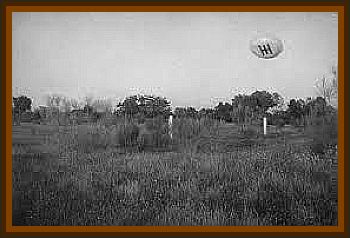 A UFO sighting galvanized the attention of hundreds of onlookers, causing commotion in the city’s downtown area.

It was a point of light that stood out in the blue skies and moved very slowly. Word spread very quickly that there was a strange object in the sky and corners became filled, in a matter of minutes, with people straining to see the mysterious point of light that no one could readily identify.

The UFO was seen for one hour and experts consulted about it could not offer an answer to explain what was seen.

The fact is that it unleashed the curiosity of the passers by and there was even a measure of fear, as there were those said this omen represented the end of the world.

The clock marked 12:40 p.m., the time at which employees take their lunch breaks. Office workers wearing ties and eating ice cream cones on their way back to work, stopped to look. Peddlers, shop workers and pedestrians turned their eyes skyward as others pointed at the zenith.

At the busy El Parque soda fountain, Ariel Chavez, a reporter with DIARIO EXTRA, received the phonecall of a girlfriend who informed him about the sighting.

Ariel’s journalistic instinct was unleashed and he abandoned the tasty meat dish he had just ordered, and accompanied by sports writer Chico Sanabria from Diario Extra, who also forsook his lunch, left the eatery to look at the sky.

It’s not that they wanted to leave without paying, they just wanted to see the famous UFO.

Even the eateries owner, Francisco Pancho Flores, went after the journalists to try to get a glimpse of the flying saucer.

As it turned out, the sighting involved 3 white lights moving slowly across the sky, one near San Jose’s Parque Central, the other by the Jimenez Institute and the last one alongside the old facilities of Radio Monumental.

More than one took advantage of the tumults to steal the billfolds of the unwary who stared heavenward. This is what happened to reporter Siliva Nuñez of Prensa Libre, who was relieved of her wallet. But the pickpocket was not expecting that cameraman Omar Rivera from Extra TV42 would be on hand. The thief was caught and seized by the neck, constrained to return the billfold. This is not the first time Silvia’s been mugged. While all of this took place, Mario Castillo was able to take the photo of the object from Avenida Segunda in downtown San Jose.

It was hard to pin it down. Sometimes one could see, what appeared to be, reflections, Castillo remarked. Many remarks were voiced aloud in the street. People pointed to the sky and said that it was a flying saucer that had come because the end of the world was at hand.

Others said that UFOs come to Earth in search of something, while others quoted Biblical revelations. There were also those who were sufficiently eagle eyed so say that it was only a piece of space junk, a star or a satellite.

In the midst of so many strange comments, many crossed themselves and thought it best to keep walking. The object was discovered because many people have taken to skywatching after the news programs broadcast images of UFOs filmed this very same week.

I was indeed able to see something in the sky, but I think it was a satellite. If it was, it would have to fall at some point. One thing is sure, it was moving all over, said Jerry Bermúdez. We were all witnesses to something, but it couldn’t be a UFO. Must be some space particle, said Rebecca Zeledón.

I saw it too, it was a moving dot. I think it’s a satellite, well, I think so. But it would be fun if it was a UFO, observed Mauricio Astorga, the renowned actor who plays Benito Losetodo on Channel 7.

Look, we were out shopping and we could see the white dot in the sky that was a flying saucer, who knows if if it’s space junk, said Jose Luis Cerdas. It wasn’t a UFO, well, I think it was space junk, decided Abigail Zeledón.