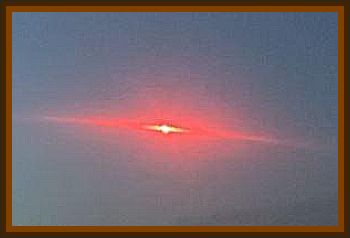 It was seen at midnight over Avenida de la Constitucion by a dozen people. Astrophysicists believe that it is not a meteorite.

Defense sources claim that no vehicle belonging to the Ejercito del Aire flew over the city’s airspace at that time.

The object seen was shiny and rounded. It was fixed in the sky and then began moving to the right.

These are the words of one of the people who, at midnight yesterday, were astounded as they looked skyward from Avenida de la Constitucion.

A round, shiny orange light remained overhead for 5 minutes. It later adopted a triangular shape and went away until it vanished. Dozens of Granadans viewed the event in astonishment. After a while, one witness saw and heard the transit of a jet airplane flying at low altitude. It flew by twice.

However, neither Granada Airport nor the Instituto de Astrofisica de Andalucia, headquartered in Granada, are aware of this event. Pablo Santos, a scientist with the aforementioned institute, has examined the images sent to 20 Minutos by one witness and believes the phenomenon could be an atmospheric reflection. The expert dismisses the possibility that it could be a meteor shower or a meteorite. Antonio Salinas of the Sociedad de Investigaciones Biofisicas in Granada, agrees with this perception:

A meteorite does not remain static for several minutes, in military circles, interceptors are immediately put on alert whenever an unidentified aircraft is sighted within the air space.

It was nothing known, not even an airplane, declared Eva Martin cuttingly. She was one of the persons who witnessed on Tuesday midnight how an orange light stopped in front of home’s terrace, changed shape and vanished. Other readers have advised 20 Minutos of having had similar sightings elsewhere in the city.

The fact that he orange light remained in the same spot for some minutes and then moved is a sign that we are facing a genuine UFO. These are the words of Rafael Casares, an expert in this type of phenomena, who describes the province as being a sightings hot spot.

Perhaps what concerns me more than the light is the fact that we heard a military aircraft and that no one explained to us what we saw, says Martin, who was in the company of 4 other individuals who witnessed how the light vanished over Torres Bermejas.