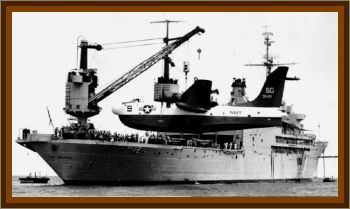 In 1963 whale steaming from Japan back to San Diego at about 2:00 a.m. one night while I was asleep, the ship hit something very large and heavy.

Now the Pine Island was no small ship itself, with a crew of 600 and 641' long, 71' wide and weighing 14,000 tons, and was moving at about 13 knots at the time, the whole ship shook and shuttered for about 10 sec, the lights all came on, and the collision alarm went off, and the ship came to a stop.

All hands went to muster, and the ship was checked for damage, but none was found.

Men were placed all around the out side railing of the ship and all outside lights were turned on, including spot and floods, we searched the area for several hours, but nothing at all was found.

Prior to, and during the collision, nothing was seen on radar or sonar, and we were in deep water, well over 5000'.

Upon returning to San Diego's North Island NAS divers were put in the water to look for hull damage, but nothing at all was found.

To my knowledge, the crew was not advised concerning talking about the incident.