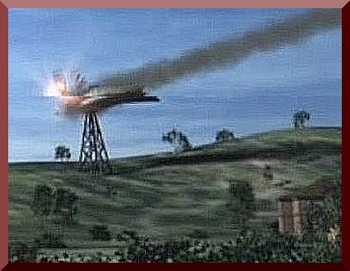 The Aurora incident, similar to the more famous Roswell UFO Incident 50 years later, reportedly resulted in a fatality from the crash. The alleged alien body is was buried in an unmarked grave at the local cemetery.

The incident as reported by A newspaper clipping on the incident:

During the 1896 & 1897 timeframe, some six or seven years before the Wright Brothers first flight, numerous sightings of a cigar shaped mystery airship were reported across the United States.

One of these accounts appeared in the April 17, 1897 edition of the Dallas Morning News. Written by Aurora resident S.E. Haydon, the alleged UFO is said to have hit a windmill on the property of a Judge J.S. Proctor two days earlier at around 6:00 a.m. local/Central time, resulting in its crash. The pilot, originally the alien pilot was dubbed the Martian pilot, who was reported to be not of this world, and a Martian according to a purported Army officer from nearby Fort Worth did not survive the crash, and was buried with Christian rites at the nearby Aurora Cemetery.

Adding to the mystery was the story of Mr. Brawley Oates, who purchased Judge Procter's property around 1945. Oates cleaned out the debris from the well in order to use it as a water source, but later developed an extremely severe case of arthritis, which he claimed to be the result of contaminated water from the wreckage dumped into the well. As a result, Oates sealed up the well with a concrete slab and placed an outbuilding atop the slab. According to writing on the slab, this was done in 1957.

A newspaper article of the event still exists, written by S.E. Haydon, reporter for the Dallas Morning News. Below is the original article:

Aurora Cemetery About 6:00 a.m., the early risers of Aurora were astonished at the sudden appearance of the airship which has been sailing around the country. It was traveling due north and much nearer the earth than before. Evidently some of the machinery was out of order, for it was making a speed of only 10 or 12 mph, and gradually settling toward the earth. It sailed over the public square and when it reached the north part of town it collided with the tower of Judge Proctor's windmill and went into pieces with a terrific explosion, scattering debris over several acres of ground, wrecking the windmill and water tank and destroying the judge's flower garden.

The International UFO Bureau, which investigates unidentified flying objects, has already initiated legal proceedings to exhume the body and will go to court if necessary to open the grave, director Hayden Hewes said Wednesday. As in the NY Times article below people just aren't even sure if and where exactly the body of the alien is with some stating that it's just not true. Others state that they can find the alien body and it should be exhumed to finally prove that the story is true or not true. We exhume bodies on much less cogent legal and scientific grounds than this, counters Ray Standord, director of Project Starlight International in Austin. If it's not a human body, then we have the first remains of an extraterrestrial being. If it is, then we can once and for all say it's a bunch of baloney. After checking the grave with metal detectors and gathering facts for three months, we are certain as we can be at this point he was the pilot of a UFO which reportedly exploded atop a well on Judge J.S. Proctor's place, April 19, 1897, Hewes said. He was not an inhabitant of this world.

The legend was back in the news! Only a couple of days later, UPI followed up the first report with another from Aurora. They had located a living witness to the event.

A 91 year old who had been a girl of 15 in Aurora at the time of the reported incident was quoted. I had all but forgotten the incident until it appeared in the newspapers recently. She said her parents had actually been to the crash sight, but had not allowed her to accompany them for fear of what might be in the debris. She recalled that the remains of the pilot, 'a small man,' had been buried in the Aurora cemetery, validating the other legends.

The Associated Press now joined the chase for the sensational story. From the city of Denton, Texas came this account: A North Texas State University professor had found some metal fragments near the Oates gas station, former Proctor farm. One fragment was said to be 'most intriguing' because it consisted primarily of iron which did not seem to exhibit magnetic properties.

The professor also said he was puzzled because the fragment was shiny and malleable instead of dull and brittle like iron.

Anyone familiar with the Roswell crash of 1947 will remember that debris from Mac Brazel's field was flown to Ft. Worth, which is only a short hop's distance from Aurora. Is this why the Military was in Aurora? Could the Government, have the alien body? Although the headstone of the alien was stolen, there remain pictures of it today. A copy of this photo now adorns the grave site.

In fact they called the alien they found the Martian pilot. They decided and proceeded to bury the body in the local cemetery with it's own headstone where it still rests in piece to this day although the headstone has been stolen. When cleaning up the wreckage of the UFO it was reported that they found odd alien writing that they dubbed a type of hieroglyphic on some of the pieces of the flying saucer type object. It's said that while cleaning up the UFO the citizens through some of the pieces of the ship into the well that was on the farm and soil testing has confirmed a high amount of aluminum on the property. Since then investigators have searched the well but have found no metal objects or anything that would possibly be part of a ship.

This of course goes against official Government statements and military reports that say that it must have been something else and that it just didn't happen. Except that Mr. T.J. Weems, the United States signal service officer and an authority on astronomy, officially reported that the creature found in the wreckage was a native of the planet Mars.

No one in 1897 took the newspaper story seriously. Back then, fiction in the guise of news, from manufactured quotes to outright hoaxes, was as common as patent medicine ads. In fact, the Aurora story was one of hundreds of stories reporting “airship” sightings that spread from west to east across half the nation in 1896-1897. The first reported sighting in the Lone Star State came on April 12, 1897, when two Ennis men said they saw an unknown aerial object silhouetted against the moon. Throughout the rest of the month, Texans from Childress to Beaumont and from Uvalde to Texarkana claimed to have seen strange things in the sky.