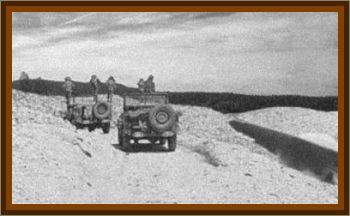 At the very same time as the Roswell crash on July 3, 1947, something most peculiar may have happened somewhere on the San Agustin Plains.

The story goes this way, and the players are:

Barney Barnett - resident of Socorro who worked for the Soil Conservation Service. Barnett, who died around 1969, was very well thought of and respected as a model of probity by all who knew him, many still living in the vicinity.

Harold Baca, neighbor and friend of Barney Barnett and father of the proprietor of Harold's Store on South California Street in Socorro.

Gerald Anderson, 5 years old in 1947, has almost-perfect recollection of the happenings in early July, 1947.

Six or so archeology students from (maybe?) the University of Pennsylvania. Never identified and never located.

Air Force personnel, identified only as a disagreeable red haired officer and a black soldier.

Nothing at all was heard about any odd events on the plains for many years. Fast forward two decades. Around 1967-68 when he was very ill with cancer of the mouth and throat, Barney Barnett told Harold Baca that his cancer was caused by the flying saucer he saw on the San Agustin Plains. "Where?" a startled Baca asked Barnett, who replied, "The San Agustin Plains out past Magdalena. There was those little guys and I leaned down to look at them and I got some of that radiation."

The Roswell Incident, written by Charles Berlitz and William Moore, includes an interesting account of Barnett's encounter on pages 57 to 63 in which Barnett is supposed to have told several people about it in the 1950s.

According to the authors, on or about July 3rd, Barnett was out working near Magdalena and a large metallic object came across with some not exactly human dead bodies around it. He described the bodies as having large, round hairless heads with small eyes. Also viewing the remains were some archeology students who might have been from the University of Pennsylvania or the University of Michigan. All were escorted away by Air Force personnel and cautioned strongly not to say anything about what they saw.

Enter Gerald Anderson, who came forward in 1990 after viewing a segment of "Unsolved Mysteries" telling about the San Agustin Plains crash. Gerald Anderson was 5 years old in 1947 and claims to have been with his father, his uncle, his cousin and his brother on a summer morning when they came across a silver object stuck in the ground at a weird angle. Later in 1990 Gerald picked out a small hill on Dave Farr's land east of Horse Springs and declared it the place. He remembered the archeology students and Barney Barnett and being chased away by the Air Force in the person of a nasty redhaired officer and a black soldier. He also reported that two of the four aliens were alive. Gerald Anderson passed a polygraph test in 1991 but his testimony is understandingly disputed by some UFO experts. Note that Barney Barnett makes no mention of the Anderson family's presence. Crash at Corona by Stanton Friedman and Don Berliner, written in 1992, covers his account on pages 89-97 and 105-108.

Stanton Friedman has done some speedy research on the incident at Horse Springs, as have several other UFO experts. But the lengthiest research, as yet unpublished, has been done by Victor Golubic.

Victor, who lives in Phoenix, was one of a number of UFO aficionados that Jacky Barrington, editor of the Magdalena Mountain Mail, sicced on me, all for the sake of a story, the big story. All of them were nice but single minded and multi-worded. Volumes of words on UFOs and aliens bombarded my ears in the spring and summer of 1995. So it was with trepidation, if not earplugs, that I offered to accompany Victor on an excursion to the supposed site of the crash near Horse Springs.

However, Victor wasn't at all what I expected. First of all, he was young enough to be my grandson. Although extremely enthusiastic about UFO research, he was able to converse about other things. Unlike the authors of the few books I've read on the Roswell crash, Victor doesn't have a theory into which he bends and crushes the facts to prove. Like me, Victor would love to find evidence of a UFO crash here but he's equally open to the possibility that it never happened. On July 5th, 1995, we drove down Route 12 to the place near Horse Springs identified by Gerald Anderson. Victor had already obtained permission from Dave Farr to enter his land. Just north of Horse Springs, we turned east on a dirt track. By and by we came to a hill on our left and Victor said, "This is it."

It was a hill looking much like every other hill with a few trees. Nothing to say that it was or wasn't witness to something fantastic. My main reservation was, that if this were the place, it would be most unlikely for anything to have crashed there without everyone in Horse Springs knowing about it.

No one did. Victor and I spoke with several people who resided in Horse Springs in 1947 and none remembered anything unusual that summer. Several did remember a plane crash by the Armijos' old Horse Springs store sometime around 1945. No one could pinpoint the exact year, but one had a distinct memory of going to see the crashed plane. "It was a military plane and the pilot was dead," said one resident of Horse Springs.

That site, which Victor and I also looked at, yielded nothing, but 50 years wipes away a lot.

The Air Force was a presence in Catron County during the late forties, staffing what they said was a radar tower on the road to the Marvin Ake ranch. People remember seeing Air Force vehicles on the roads, but no one we spoke to spotted one carrying bodies of the extra-terrestrial kind.

From Quemado to Reserve to Datil and Socorro, in person and by telephone, Victor interviewed people who had lived in these here parts during those years. Occasionally, I went along, and I quickly became an admirer of his technique. Infinitely patient, he was willing and eager to spend hours listening to people talk on all subjects. Gradually, Victor would lead them back to the subject at hand. He would return a few months later to talk to them again and telephone at intervals to see if they remembered anything else. With the aid of his computer and out of town phone books, Victor tracked down people all over the country.

Tracked them down, talked to them and found nothing really conclusive regarding the San Agustin Plains UFO crash.

These sources are not named in this unscientific article because we never mentioned any intent to publish our findings; we were just making inquiries. We heard many fascinating tales handed down over the years, but no first hand knowledge.

A Quemado resident recalls a visitor in 1946 (a year earlier than the famous crash) who said, "I just stopped in Magdalena and there was a thing from space. There's people in it and they tell me one of ems still alive.

Another Quemado resident knew a man in Mangus who saw a shiny thing in the mountains one summer in the late forties.

A few Aragon residents recall hearing about the incident. Just that there was tracks, said one. And from another, There were strange people. They were moving. It looked like a plate. They admitted that this was hearsay, which they did not necessarily subscribe to.

Most remembered first hearing about the UFO crash in the 1980s when the investigators started appearing in Catron and Socorro counties. There must be people out there who saw or heard something in the fifties or before. But where are they?

Instead of answers, there are questions.

Did Barney Barnett, whose Soil Conservation work usually took him west from Socorro, go east that day and come across the Roswell UFO crash? Could the crash that Barnett saw have been the main part of the crash that also left pieces at Corona?

Did the crash occur on the San Agustin Plains, but not near Horse Springs? This is the theory I prefer. Remember, Harold Baca quotes Barney Barnett as saying "out past Magdalena." To me that means on the way to Datil but closer to Magdalena. Describing Horse Springs, one would more likely say "south of Datil."

There is some not evidence - but hearsay to support this theory. According to a Magdalena resident, the UFO is purported to have crashed about 15 miles west of Magdalena, possibly around Wolf Well or Tres Montanas.

Yet a man from Socorro says Barney Barnett told his father that the crash occurred somewhere between Datil and Horse Springs. And there we have it. Or don't have it.