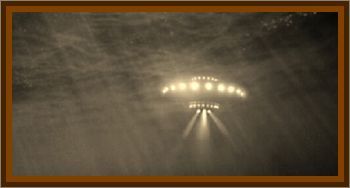 I was 12 at the time. We left Glidden around 2:30 a.m. going out to Lake Augustin. We saw a fireball about 150' in front of us and it came towards us at a high rate of speed. We were all scared but it went over the car, and then it was gone. The second time we observed it was the next year. Again it was summer around the same time at night.

We first saw the light in the trees as we got closer to it. It got so bright it was hard to see. As we got closer to it a logging company made a path in the woods so the trees were gone and at that time we could see the UFO and the bright light on the bottom of the UFO. Every one in the car started screaming. I was sitting behind the driver telling her to turn the lights off and stop. At this time the people in the car started yelling at the driver to go.

What I saw that night was a UFO. At the back of a house with a very bright white light on the bottom the light was about 15' wide and the UFO was about 30' wide and it looked like gray metal. I didn't see anyone or anything. At some point the light dimmed and the UFO flew towards Glidden and the people in the car finally stop yelling.

I was asking the driver why she didn't stop and she told me it was dark out and she didn't want to get her car hit by another car. It was so bright at the time, it was as bright as day. Another lady in the car said you will see things like that at night. Nobody wanted to talk about what happened. The next day one of the adults told me never talk about what happened to anyone. Well a few years later in the summer we were up at the lake and I was talking to someone that had a cottage on the other end of the lake and she asked me what was going on over by me the night before. I asked her what was she was talking about. She told me someone at her place went outside late at night and he saw a very bright light in the area I was staying at. All I remember from the night before is I went to sleep around 10:00 p.m. so I could go fishing the next morning.

As the years went by I was in my late twenties and I talked to my sister about what we seen she didn't have any memory of it. She told me she wished she did. I'm 55 now the 2 adults in the car have died and 2 of the kids I lost contact with, and my sister doesn't remember anything.