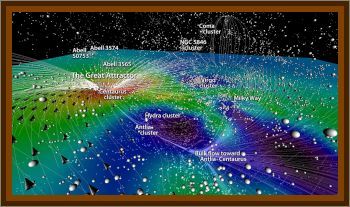 Location: Center Of The Laniakea Supercluster

Ever had a nightmare where you're trapped and being dragged towards your inescapable doom? Well, you might not want to know, but on a galactic scale, we are living that nightmare right now.

That's because, at a speed of 1.36 million miles per hour, the Milky Way, its companion galaxies, and various galactic hangers on are all moving towards an area of space we don't know much about. The speed at which we are moving implies an area of space creating a massive gravitational force, roughly equivalent to 10,000 galaxies.

And since it is sucking in everything within a considerable distance, this mysterious region has been dubbed:

And if that isn't terrifying enough, we also can't see it.

The Great Attractor sits in a region of space referred to by astronomers as the:

Zone of Avoidance, which is ironic, because we can't avoid it. It's called that because it sits exactly on the other side of the densest part of the Milky Way, thus observing it through all those stars and massive clouds of space dust is nearly impossible.

Nevertheless, astronomers have turned some of their instruments in the direction of the attractor, and determined that while there are a bunch of previously undiscovered galaxies in that region, there are still not enough to explain the force being exerted.

This leaves the true source of our eventual doom as either a previously inconceivable gravitational mass that we can't identify, or perhaps the interstellar equivalent of an internet dating serial killer, obscuring its identity behind a perfectly crafted profile to entice everyone within reach and draw them inexorably into their grubby space van with blacked out windows, dirty carpet, matching shovel accessories, and an entire superclusters' worth of chloroform.

The Great Attractor is a gravitational anomaly in intergalactic space at the center of the Laniakea Supercluster that reveals the existence of a localized concentration of mass tens of thousands of times more massive than the Milky Way.

This mass is observable by its effect on the motion of galaxies and their associated clusters over a region hundreds of millions of light years across.

The Great Attractor is moving towards the Shapley Supercluster.

These galaxies are all redshifted, in accordance with the Hubble Flow, indicating that they are receding relative to us and to each other, but the variations in their redshift are sufficient to reveal the existence of the anomaly.

The variations in their redshifts are known as peculiar velocities, and cover a range from about +700 km/s to -700 km/s, depending on the angular deviation from the direction to the Great Attractor.