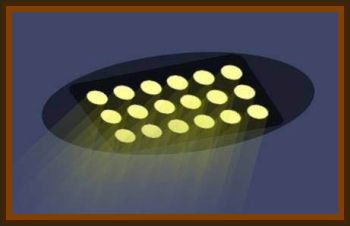 My wife and I were jogging last night around 8:00 p.m.

As it’s been getting dark earlier, we decided to jog through our own neighborhood. At about 8:30 p.m. we were heading west down Old College Way. I glanced up and saw a panel of lights almost directly overhead. It was moving slowly and silently from West to East. It seemed to be approximately 1,000' to 2,000' off the ground. There was no erratic movement at all. After a few seconds the lights dimmed out, almost as if they had sensed me watching. The sky was very clear and once the lights went out, I could not make out any dark silhouette.

My wife had not looked up in time to witness anything, but suggested maybe I saw a shooting star. As we looked at the sky, a small private jet went overhead, heading almost due North. It was quite audible and its black silhouette was easily identifiable. It did not appear to be chasing or even aware of the lights. My wife repeated that it must have been a shooting star.

They appeared to be angled over the ground at about a 30° to 45° angle. There was a definite dark shadow behind the lights like a short, stubby cigar, though the lights themselves seemed to be flat on the same plane. My most immediate thought was that I was looking at the Goodyear Blimp, but the moment the lights dimmed out, the black shape vanished as well.

From my experience at football games, I have been able to hear the blimp even over the crowd noise. Whatever this was, was dead silent.