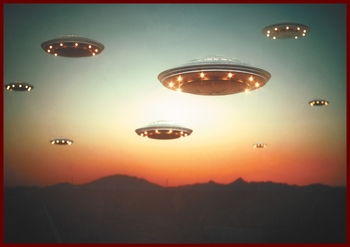 The Atalanti case is considered the most important UFO incident in Greece.

Some researchers refer to it as the Greek Roswell, as it raised the awareness of the Greek public on the UFO phenomena.

A fleet of around 12 to 17 UFOs was observed in multiple locations over mainland Greece. After flying over the Peloponnese South of mainland Greece. The fleet made a turn and headed towards the North.

At 9:30 p.m., while over the town of Atalanti, 90 miles northwest of Athens, one of the UFOs parted from the fleet formation.

The witnesses mentioned that the craft seemed to have some problem, it changed its color to red and appeared to have caught fire.

At the same time 3 explosions were heard, other reports speak of loud metallic sounds.

The craft landed at the top of a hill where the Profit is Elias church is ½ of a mile, situated outside of the village of Megas Platanos, a few miles from Atalanti.

Locals looking at the incident from a distance of approximately 1 mile reported what was happening at the top of the hill to the police but the location was not easily accessible during night time.

Once the malfunctioning unknown craft landed, the rest of the fleet also landed around it as if to protect it. The gathering of all the craft on top of the hill lit up the area allowing witnesses to see.

Witnesses, mostly local farmers, describe the objects as round and having the size of a tractor. According to a witness that approached closer to the landing location, the beings were described as short and humanoid and appeared to be working on repairing the craft.

The humanoids were able to repair the craft and all of the fleet flew off together.

Locals visited the location the next morning. The grass was burned and some smoke was coming off the ground. Some collected, cables, metallic parts and a sponge like artifact.

A close by pine tree had the lower part of its trunk burned. A witness that touched the trunk had his hand burned.

A month later the Greek military published a report. The report focused on the equipment found.

According to the report the pieces found included a plug made of copper with a diameter of 4½" and Arabic writing on it, a multi pin cable made of copper connected to the plug, the cables insulation, a silk like material, a burnt plastic cover, a steel ring and three 4" steel bars each one with a switch featuring the Greek letter F.

The report concluded that the pieces probably belonged to an old satellite. But satellites do not land and take off again.