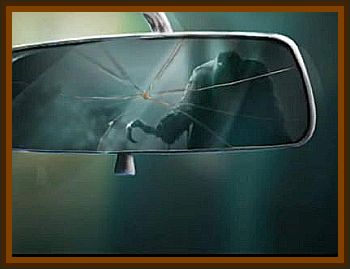 PN was on his way to work at a warehouse, around the time he was driving his Fiat 125 through the small village of Asum, as the village reached a rise near a bunch of trees it suddenly stalled.

As the road there slopes down, the car carried on rolling forwards. When PN reached a T junction he stopped the car, at the same time catching sight of a strange phenomenon.

About 180' away on the right hand side of Asum Bygade, Asum High Street, was a floating glowing object, partly above the and partly above the copse. It appeared to be floating about 5' above the ground and was about 10' high and circle shaped.

PN found it very difficult to make out the object’s shape, as it was emitting a bright light that illuminated the area with a yellowish color. There appeared to be a ramp leading down from the object into the copse, which lies a few feet below road level. The ramp was the same width as the object.

At the point where the ramp was connected to the glowing object there seemed to be a large opening into the interior.

PN had difficulty seeing any details, as the interior resembled an orange cloud.

PN saw 2 groups of entities. The first group comprised of 7 small entities that were running up and down the ramp. Their movements were so fast and continuous that they reminded PN of something mechanical.

He had the impression that the creatures were gathering something from the copse and giving it to someone inside the object.

In addition to these small entities PN saw another group of 3 somewhat larger individuals. 2 of these were standing at the top of the ramp, by the entrance, while the other was standing down at the foot. They were holding an instrument of some sort.

PN perceived the latter group to be guards. They stood still throughout the entire sighting. The entities were about 3' tall and had a light gray appearance. They resembled 2 triangles placed on top of each other.

A small triangle at the top formed the head, with a larger one underneath that corresponded to the body. The guards were a little taller than the other entities.

PN does not remember seeing arms on the entities. Their legs were just small stumps sticking downwards. The entities floated above the ground, while the leg stumps did not move.

After the shocked witness watched for about a minute, he glanced in the opposite direction along Asum Bygade and caught sight of a taxi standing 500' from the copse down towards the valley at Asum. The taxi driver flashed his lights several times. PN was not sure whether it was meant as a signal to him or the entities.

At this point he managed to start his car. At the same time it appeared the entities had seen him and they began to move towards him at great speed.

Immediately after this, the taxi turned around and drove off back towards Odense.

The witness was now terrified and turned left, driving as fast as he could along Asum Bygade and down through the valley. When he was up over the valley he looked in the rear view mirror and saw that the entities had now got as far as the bottom of the valley and were out in the middle of the bridge over the brook. He drove quickly away losing sight of the entities.