UFOs Sighted By An Astronaut 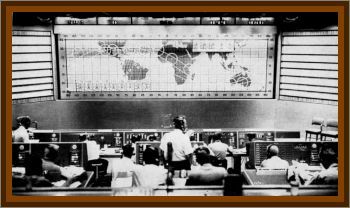 I was testing a P-51 fighter in Minneapolis when I spotted this object, said Deke, describing an incident the Mercury Astronaut had in 1951. I was at about 10,000' on a nice, bright, sunny afternoon. I thought the object was a kite, then I realized that no kite is gonna fly that high. As I got closer it looked like a weather balloon, grey and about 3' in diameter. But as soon as I got behind the darn thing it didn't look like a balloon anymore. It looked like a saucer, a disk. About the same time, I realized that it was suddenly going away from me, and there I was, running at about 300 MPH. I tracked it for a little way, and then all of a sudden the damn thing just took off. It pulled about a 45° angle climbing turn and accelerated and just flat disappeared.

One of the original Mercury Astronauts and the last American to fly in space alone. On May 15, 1963 he shot into space in a Mercury capsule for a 22 orbit journey around the world. During the final orbit, Major Gordon Cooper told the tracking station at Muchea, near Perth Australia, that he could see a glowing, greenish object ahead of him quickly approaching his capsule. The UFO was real and solid, because it was picked up by Muchea's tracking radar. Cooper's sighting was reported by the National Broadcast Company, which was covering the flight step by step, but when Cooper landed, reporters were told that they would not be allowed to question him about the UFO sighting.

Major Cooper was a firm believer in UFOs. Ten years earlier, in 1951 he had sighted a UFO while piloting an F-86 Sabrejet over Western Germany. They were metallic, saucer shaped disks at considerable altitude and could out maneuver all American fighter planes. Major Cooper also testified before the United Nations:

I believe that these extra terrestrial vehicles and their crews are visiting this planet from other planets. Most astronauts were reluctant to discuss UFOs. I did have occasion in 1951 to have two days of observation of many flights of them, of different sizes, flying in fighter formation, generally from east to west over Europe.

And according to a taped interview by J.L. Ferrando, Major Cooper said:

For many years I have lived with a secret, in a secrecy imposed on all specialists in astronautics. I can now reveal that every day, in the USA, our radar instruments capture objects of form and composition unknown to us. And there are thousands of witness reports and a quantity of documents to prove this, but nobody wants to make them public. Why? Because authority is afraid that people may think of God knows what kind of horrible invaders. So the password still is:

We have to avoid panic by all means.

I was furthermore a witness to an extraordinary phenomenon, here on this planet Earth. It happened a few months ago in Florida. There I saw with my own eyes a defined area of ground being consumed by flames, with four indentions left by a flying object which had descended in the middle of a field. Beings had left the craft, there were other traces to prove this. They seemed to have studied topography, they had collected soil samples and, eventually, they returned to where they had come from, disappearing at enormous speed. I happen to know that authority did just about everything to keep this incident from the press and TV, in fear of a panicky reaction from the public.

On May 11, 1962 NASA pilot Joseph Walker said that one of his tasks was to detect UFOs during his X-15 flights. He had filmed 5 or 6 UFOs during his record breaking 50 mile high flight in April, 1962. It was the second time he had filmed UFOs in flight.

During a lecture at the Second National Conference on the Peaceful Uses of Space Research in Seattle, WA he said:

I don't feel like speculating about them. All I know is what appeared on the film which was developed after the flight. To date none of those films has been released to the public for viewing.

On July 17, 1962 Major Robert White reported a UFO during his 58 mile high flight of an X-15. Major White reported: I have no idea what it could be. It was grayish in color and about 30' to 40' away. Then according to a Time Magazine article, Major White exclaimed over the radio:

There are things out there. There absolutely is.

In June 1965, astronauts Ed White, first American to walk in space, and James McDivitt were passing over Hawaii in a Gemini spacecraft when they saw a weird looking metallic object. The UFO had long arms sticking out of it. McDivitt took pictures with a cine-camera. Those pictures have never been released.

Gemini Astronauts James Lovell and Frank Borman saw a UFO during the second orbit of their 14-day flight in December 1965. When Borman reported seeing an unidentified spacecraft, Gemini Control told him that he was seeing the final stage of their own Titan booster rocket.

During James Lovell's flight on Gemini 7:

Capcom: This is Houston. Say again 7.

Lovell: Said we have a bogey at 10 O'clock high.

Capcom: Gemini 7, is that the booster or is that an actual sighting?

Lovell: We have several, actual sighting.

Lovell: We also have booster in sight.

According to the NASA Astronaut Neil Armstrong, the Aliens have a base on the Moon and told us in no uncertain terms to get off and stay off the Moon. According to unconfirmed reports, both Neil Armstrong & Edwin Buzz Aldrin saw UFOs shortly after that historic landing on the Moon in Apollo 11 on July 21, 1969. I remember hearing one of the astronauts refer to a light in or on a crater during the television transmission, followed by a request from mission control for further information. Nothing more was heard. According to a former NASA employee Otto Binder, unnamed radio hams with their own VHF receiving facilities that bypassed NASA's broadcasting outlets, HAM radio operators, picked up the following exchange:

NASA: What...what...what the hell's going on? Whatsa matter with you guys?

Apollo11:They're here, under the surface.

Apollo11: Roger, we're here, all three of us, but we've found some visitors... Yeah, they've been here for quite a while judging by the installations...

Apollo11: I'm telling you, there are other spacecraft out there. They're lined up in ranks on the far side of the crater edge...

Apollo11: Let's get that orbit scanned and head home...In 625 to the 5th, auto relays set...My hands are shaking so bad...Film...yes, the damned cameras were clicking away from up here...

NASA: Did you fellows get anything?

Apollo11: Had no film left by the time...(garbled)...three shots of the saucers, or whatever they were...may have fogged the film.

NASA: The mirrors, the mirrors...you set them up, didn't you?

Apollo11: Yes, the mirrors are all in place. But whatever built those spacecraft will probably come over and pull 'em all out by the roots tomorrow....

A professor, who wished to remain anonymous, was engaged in a discussion with Neil Armstrong during a NASA symposium.

Professor: What really happened out there with Apollo 11?

Armstrong: It was incredible, of course we had always known there was a possibility, the fact is, we were warned off, by the Aliens. There was never any question then of a space station or a moon city.

Professor: How do you mean warned off?

Armstrong: I can't go into details, except to say that their ships were far superior to ours both in size and technology, Boy, were they big, and menacing. No, there is no question of a space station.

Professor: But NASA had other missions after Apollo 11?

Armstrong: Naturally, NASA was committed at that time, and couldn't risk panic on Earth. But it really was a quick scoop and back again.

According to a Dr. Vladimir Azhazha: Neil Armstrong relayed the message to Mission Control that two large, mysterious objects were watching them after having landed near the moon module. But this message was never heard by the public, because NASA censored it.

According to a Dr. Aleksandr Kasantsev, Buzz Aldrin took color movie film of the UFOs from inside the module, and continued filming them after he & Armstrong went outside. Armstrong confirmed that the story was true but refused to go into further detail, beyond admitting that the CIA was behind the coverup.

Eugene Cernan was commander of Apollo 17. In a Los Angeles Times article in 1973 he said, about UFOs:

I've been asked, about UFOs, and I've said publicly I thought they, UFOs, were somebody else, some other civilization.

In 1979 Maurice Chatelain, former chief of NASA Communications Systems confirmed that Armstrong had indeed reported seeing two UFOs on the rim of a crater. Chatelain believes that some UFOs may come from our own solar system, specifically Titan. The encounter was common knowledge in NASA, but nobody has talked about it until now. All Apollo & Gemini flights were followed, both at a distance and sometimes also quite closely, by space vehicles of extraterrestrial origin, flying saucers, or UFOs, if you want to call them by that name.

Every time it occurred, the astronauts informed Mission Control, who then ordered absolute silence.

I think that Walter Schirra aboard Mercury 8 was the first of the astronauts to use the code name Santa Claus to indicate the presence of flying saucers next to space capsules. However, his announcements were barely noticed by the general public. It was a little different when James Lovell on board the Apollo 8 command module came out from behind the moon and said for everybody to hear:

Please be informed that there is a Santa Claus. Even though this happened on Christmas Day 1968, many people sensed a hidden meaning in those words.

The rumors persist. NASA may well be a civilian agency, but many of its programs are funded by the defence budget and most of the astronauts are subject to military security regulations. Apart from the fact that the National Security Agency screens all films and probably radio communications as well.

We have the statements by Otto Binder, Dr. Garry Henderson & Maurice Chatelain that the astronauts were under strict orders not to discuss their sightings.

And Gordon Cooper has testified to a United Nations committee that one of the astronauts actually witnessed a UFO on the ground. If there is no secrecy, why has this sighting not been made public?

Scott Carpenter has reported: At no time, when the astronauts were in space were they alone: There was a constant surveillance by UFOs.