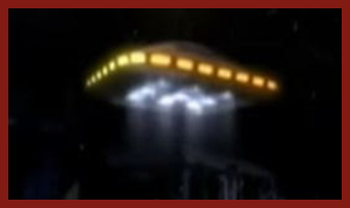 Grace Askew was a normal Australian woman as she was driving in her car with a group of girlfriends. Then her world changed forever as she caught a glimpse of a bright orange light shining through the trees as she drove.

One of the other women in the car then noticed a really bright light above the trees and they joked that it might be a UFO. The joke ended though when more lights appeared behind the car and they put the foot down and tried to find a safe place to park. When the women got out of the car they clearly saw a UFO fly over the top of where they were standing.

Grace Askew and the other women that experienced the alien encounter watched the possible UFO until it just suddenly vanished and left all of the women scared for their lives.

The lights then returned once more in the form of a very blinding light and Grace Askew clearly saw an alien being step out of the lights of the UFO.

Grace Askew's husband was doubting of her alien encounter. That all changed though two weeks later when Grace and her husband were alerted to the distress of their 15 year old son. He was going crazy in his bedroom and complaining about a noise he was hearing.

When Grace Askew took the time to listen she heard a familiar sound and then she knew the aliens had returned. They looked out of the window to see the same alien UFO hovered across the top of their house.