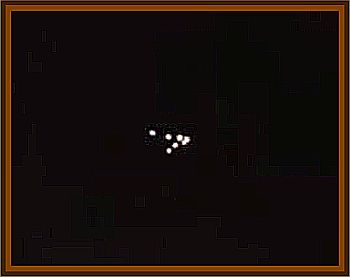 I was in Okinawa, an Island in the Pacific. The sky from my vantage point was 360º, at least ½ mile, all the way down to the ocean. The sky was clear, there was numerous stars visible.

Then some movement caught the corner of my left eye. I looked up, and on my extreme left was a V shape moving from my left to the right.

The point of the V was the leading edge, there were four points of light on one side, and two on the other side. It moved overhead at an incredible speed, stayed still overhead for a few seconds, then zig-zagged three times and after the third manuver, speed away the the far side of the horizon in about 1.5 seconds.

The formation stayed in the exact same position through all maneuvers, never deviating position. It wasn't shooting stars or Planets or any other form of explaination.

I could see the stars clearly, though somewhat dimmer. These lights were independant of any other objects in my vision. I know what I saw, you might think I'm nuts, but I really don't care. I have seen other things I was able to explain away since, but one other. No one believes it either.