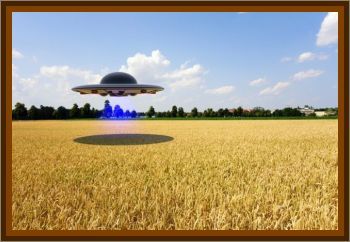 13 year old Madeleine Arnoux, who in the summer of 1944, while picking berries in the small village of Le Verger in France, witnessed not only a strange flying object but also its astonishing humanoid occupants. Madeleine, who spoke about the incident years later, stated the object to be a dull, metallic gray color and about the size of a small car.

Beside the object, she could clearly see strange beings, about 3' high and dressed in sort of brown colored overalls.

She noticed how the atmosphere around her had suddenly changed to an electric thundery state. More worrying for the young girl was her inability to move despite her desperately wanting to.

All the while, the beings in front gave no indication that they were aware of her presence and went about their business, whatever they were doing.

Suddenly, her body obeyed her commands, and she ran toward her bike several feet away. By the time she had bent down to pick it up and stood upright again, the beings and their strange craft were nowhere to be seen.

Over the years, Madeleine has discounted those who have wondered whether she may have seen German soldiers, or perhaps members of the French Resistance, or even that she imagined the whole incident, stating had it been soldiers or resistance members, who she had encountered relatively frequently, they would have approached her. And as for imagining it, in her words, I know what I saw.