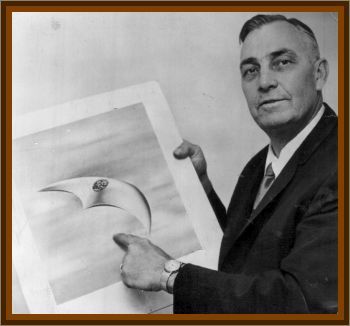 Arnold was flying from Chehalis, WA to Yakima, WA in a CallAir A-2 on a business trip. He made a brief detour after learning of a $5,000 reward for the locating of a U.S.M.C. C-46 transport airplane that had crashed near Mt. Rainier, in the Cascade range. The skies were completely clear and there was a mild wind.

A few minutes before 3:00 p.m. at about 9,200' altitude, and near Mineral, WA, he gave up his search and started heading eastward towards Yakima. He saw a bright flashing light, similar to sunlight reflecting from a mirror. Afraid he might be dangerously close to another aircraft, Arnold scanned the skies around him, but all he could see was a DC-4 to his left and behind him, about 15 miles away.

About 30 seconds after seeing the first flash of light, Arnold saw a series of bright flashes in the distance off to his left, or north of Mt. Rainier, which was then 20 to 25 miles away. He thought they might be reflections on his airplane's windows, but a few quick tests, rocking his airplane from side to side, removing his eyeglasses, later rolling down his side window, ruled this out. The reflections came from flying objects. They flew in a long chain, and Arnold for a moment considered they might be a flock of geese, but quickly ruled this out for a number of reasons, including the altitude, bright glint, and obviously very fast speed. He then thought they might be a new type of jet and started looking intently for a tail and was surprised that he couldn't find any.

They quickly approached Rainier and then passed in front, usually appearing dark in profile against the bright white snowfield covering Rainier, but occasionally still giving off bright light flashes as they flipped around erratically.

Sometimes he said he could see them on edge, when they seemed so thin and flat they were practically invisible. Arnold described them as a series of objects with convex shapes, though he later revealed that one object differed by being crescent shaped.

Although the term saucer was used in a 1930 UFO report in Texas, it was meant to show the relative size of the object from arm's length. Arnold told a newspaper reporter that the objects moved like a saucer would if you skipped it across the water.

Arnold was indicating how the objects bounced across the atmosphere, not the shape of the object, Yet, newspaper reporter Bill Bequette's report on the AP news wire used the term flying saucer to describe the objects' shape. A phrase was coined.

At one point Arnold said they flew behind a subpeak of Rainier and briefly disappeared. Knowing his position and the position of the subpeak, Arnold placed their distance as they flew past Rainier at about 23 miles. Likewise, Using a Dzus cowling fastener as a gauge to compare the 9 objects to the distant DC-4, Arnold estimated their angular size as slightly smaller than the DC-4, about the width between the outer engines, about 60'.

Arnold also said he realized that the objects would have to be quite large to see any details at that distance and later, after comparing notes with a United Airlines crew that had a similar sighting 10 days later, placed the absolute size as larger than a DC-4 airliner, or greater than 100' in length. A.A.F. analysts would later estimate 140' to 280', based on analysis of human visual acuity and other sighting details.

Arnold said the objects were grouped together, in a diagonally stepped down, echelon formation, stretched out over a distance that he later calculated to be 5 miles. Though moving on a more or less level horizontal plane, Arnold said the objects weaved from side to side, like the tail of a Chinese kite, darting through the valleys and around the smaller mountain peaks. They would occasionally flip or bank on their edges in unison as they turned or maneuvered causing almost blindingly bright or mirror like flashes of light.

The encounter gave him an eerie feeling, but Arnold suspected he had seen test flights of a new military aircraft. As the objects passed Mt. Rainer, Arnold turned his plane southward on a more or less parallel course. It was at this point that he opened his side window and began observing the objects unobstructed by any glass that might have produced reflections.

The objects did not disappear and continued to move very rapidly southward, continuously moving forward of his position. Curious about their speed, he began to time their rate of passage. He said they moved from Mt. Rainer to Mt. Adams where they faded from view, a distance of about 50 miles, in one minute and 42 seconds, according to the clock on his instrument panel. When he later had time to do the calculation, the speed was over 1,700 mph. This was about 3 times faster than any manned aircraft in 1947. Not knowing exactly the distance where the objects faded from view, Arnold conservatively and arbitrarily rounded this down to 1,200 mph, still faster than any known aircraft, which had yet to break the sound barrier. It was this supersonic speed in addition to the unusual saucer or disk description that seemed to capture people's attention.

As was customary at that time, the U.S. military, though aware of the Arnold report, at first tried to simply ignore the matter. But, the story broke big across the nation, and the military had to make some statement on the sighting. On July 7, a meeting was held to determine how to respond to the report. This conference could also have been prompted by the Roswell Crash which was also making headlines.

Chief of the A.A.F. Air Intelligence Requirements Division, General Schulgen would head the group. Under pressure to give the public some reassurance, the decision was made to hear from qualified reporters of UFO sightings. In a couple of days, Arnold was called in for an interview.