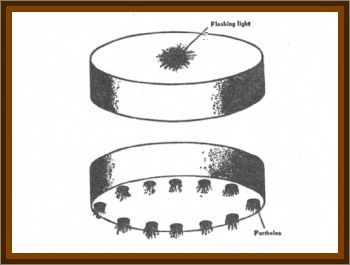 The observation, which lasted about 25 to 35 seconds, occurred about 15 miles north of a medium sized city. When the object passed in front of the airliner, it was not more than ½ mile distant and at an altitude of about 1000' higher than the airliner.

The object appeared to be circular, with a diameter of approximately 100' and with a vertical height considerably less than the diameter, giving the object a disk like shape. In the top center was a light which was blinking at an estimated 3 flashes per second. This light was so brilliant that it would have been impossible to look at it continuously had it not been blinking, and could be seen only when the object was approaching, or after it had passed the airliner.

When the object passed in front of the observers, the bottom side was visible. The bottom side appeared to have 9 to 12 symmetrical oval or circular portholes located in a circle approximately ¾ of the distance from the center to the outer edge. Through these portholes came a soft purple light about the shade of aircraft line without spinning.

Considering the visibility, the length of time the object was in sight, and the distance from the object, the Reserve Air Force Captain estimates the speed to be in excess of 1000 mph.