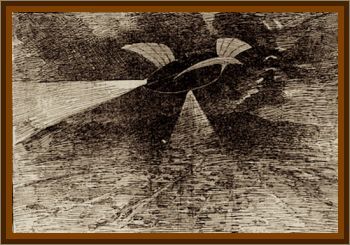 One of the most mysterious incidents in Arkansas history was actually tied to a series of similar reports that appeared around the nation in the years 1897 and 1898. The alleged incident took place on May 6, 1897 in the Ouachita Mountains near Hot Springs.

As the story goes, Constable John J. Sumpter, Jr., and Deputy Sheriff John McLemore were investigating reports of cattle rustling near the community of Jessieville when they came across an unexpected sight. The 2 men were riding northwest over Blue Ouachita Mountain when they saw a bright light in the sky. The light disappeared behind the hilltops and the men continued their ride.

After a ride of a few more miles, they again saw the light. This time it was much closer to the Earth and appeared to be descending.

It once again disappeared, but after a ride of another half a mile, the men's horses refused to continue. Looking into the darkness, the officers quickly saw the reason why. People could be seen moving around with lights. Drawing their weapons, they approached to investigate.

Demanding that the mysterious people identify themselves, both lawmen were startled when a man with a beard approached holding a lantern and announced that he and 2 companions were traveling the country in an airship.

He showed them his unusual craft. They reported it to be cigar shaped and about 60' long. The mysterious man tried to coax them aboard the craft, but they refused to go. When they returned to the same place later in the night, no trace was seen of the airship or its occupants.

Exactly what the men saw remains a mystery to this day. Airplanes and powered blimps had not yet been invented in 1897, yet newspapers across the country were filled with such reports.

Some speculation that the late 19th century eyewitnesses saw a spacecraft from another planet and aliens. Others believe in more Earthly explanations, either an experimental aircraft that was still being kept secret or an outright hoax.

It is interesting to note that a resident of the Hot Springs area applied for a patent for a flying machine at about the same time. He did not receive his patent, but obviously was experimenting with some type of aircraft. Whether he ever actually constructed a flying machine is not known.

Whatever the lawmen saw in the Ouachita Mountains that night remains unidentified to this day.

No claims of responsibility for the incident have ever surfaced. Not long after the Arkansas incident, a man in Mississippi reported a similar encounter with the airship, and described the craft in much the same way.