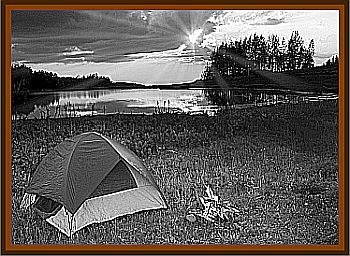 Former military physician, Vladimir Shabanov was camping overnight on the eastern shore of the Khoper River.

At night while preparing a bonfire he decided to go into the woods and gather some brushwood. After entering the forest he gradually went deeper into. As he collected tree branches and sticks he suddenly felt an inexplicable uneasiness, he looked around and noticed a strange glow penetrating through the trees. Without dropping his firewood he walked directly towards the glow.

After about 1000' he came to the edge of an extensive clearing, which was overgrown with tall grass. The clearing was covered in thick fog which vividly reflected white light that was coming from a strange object that had apparently landed in the middle of the clearing.

The surface of the object emitted a bluish metallic luster. After coming closer to the clearing Shabanov suddenly grew torpid and held on tightly to the firewood. He was not exactly afraid but knew he was experiencing something uncommon.

Suddenly from behind the object appeared several human like figures dressed in tightly fitting, slightly luminous coveralls, gray in color, and tight belts. The distance of the object from the edge of the clearing was approximately 750' to 1000' and the figures were clearly visible.

They walked around the object as inspecting something and did not look in the direction of the witness.The witness stood mesmerized and watched the scene for about 10 minutes.

Then the figures approached the object again stood under it and appeared to be sucked into the craft just like a vacuum cleaner. 10 to 15 seconds later the surface of the object began to emit a pink light and the ring around its equator began to rotate at a very high rate of speed, the color of the object then became bright white like that of a welder’s light.

The supports were then pulled upwards and it left vertically rapidly disappearing from sight. Vladimir did not see any windows or lights on the object and thinks that the upper dome could have been transparent in nature.