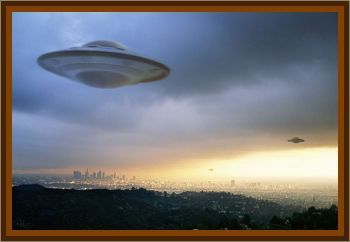 Working as a survey crew of five for a power company, we were surveying for a transmission line across Idaho going from west to east. While in the central part we had moved ahead to make a new setting.

We had just parked our vehicle and were setting up our transit and surveying equipment and someone said, there goes a jet. We looked to the North and an object was raising up from the lava beds. It was round and shiny on top. It was not more than a ¼ of a mile away and maybe 300' to 400' high. We had just eaten our lunch, so it was midday. A very clear and sunny day. It was a flying saucer, plain and clear. We had apparently disturbed a landed craft.

We watched it with our survey equipment as it just hovered there. It rocked back and forth while there, apparently observing us. It was very saucer shaped and never made a sound. After about two or three minutes, it turned away from us to the north and up. In about three seconds it was out of sight, very fast. We were about straight south across the lava beds from Arco ID.

The time was mid summer and 1957 or 1958. There is myself and maybe two others still alive. It was not reported at the time because we were on schedule to finish the line survey for a construction crew. We sure wished we had a had a camera. It was real.