Alien From Aquila Constellation Died In Front Of 3 Swedish Lumberjacks 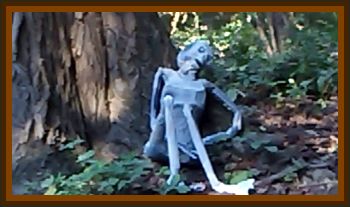 In 1955, a Swedish lumberjack encountered the dying alien humanoid who was lying near the crashed cigar shaped UFO. He was alive for 2 hours and talked with the man in the Swedish language.

This story came into the limelight when UFO researcher Ed Komarek started his case on it. The article Humanoid Dies in Sweden, translated by a man named John Fontaine, was first published in Tim Beckley’s UFO Universe which later stopped its publication.

Fontaine claimed to have met the witness during a UFO conference in Charlottenburg, Copenhagen, Sweden. Both shared their knowledge about UFOs, and then the unspecified witness told Fontaine about the most intriguing alien encounter he had in 1955.

So, this whole story passed through at least 3 persons, and therefore some of its details may be distorted or misunderstood.

Nevertheless, it is very interesting, even with distortions taken into account.

John Fontaine met a Swedish man who had been working as a lumberjack, witnessed a dying alien humanoid in 1955.

The man said it all started in 1955 when he had been working as a lumberjack with his 2 brothers in the town of Västra Norrland on the shores of the Gulf of Bothnia of the Baltic Sea, who supplied cutting trees to a saw mill in Sweden.

One July morning at 6:00 a.m., all of them were busy cutting trees when they heard something big thrashing through the forest, breaking branches and grazing trees. A moment later, they saw an elongated cigar shaped object, the size of a small private jet, flying through the trees, knocking off the branches.

The lumberjack thought it was a small airplane whose wings had blown off, and it was heading to a river nearby for a crash landing.

The cigar shaped UFO fell near the river on the shores of the Gulf of Bothnia of the Baltic Sea.

The men began to chase the UFO which fell near the river in a 30' to 40' clearing, and then a bright intense flash illuminated everything around, which, however, was completely silent.

The flash was incredibly bright and had such strange properties that over it, they could see right through the trees, as if through an X ray machine. And then, the center of the light began to suck everything that was on the ground and could be easily pulled into it.

All this was lasting for a second, and then everything returned to its normal. They found nothing special, just a few piles of timber scattered on the surface. Then they decided to go back when one of the brothers shouted:

Here’s a dwarf dressed in uniform.

When they looked at him, they saw a short humanoid creature. They guessed that the creature probably came from the object that fell into the river. He was about 4' tall, and his body was surrounded by a white light halo. The alien was still alive, and one of the brothers touched him.

He woke up and began shouting in Swedish, saying:

Do not touch me, it will only bring you difficulties. Now you know who I am.

A 4' tall alien humanoid was lying on the ground and was seriously injured. Fontaine said the witnesses had been surprised by the perfect Swedish dialect of the alien. The men did not get scared and became calm.

The humanoid had a good symmetrical physique, fairly broad shoulders, and normal features. His skin was yellowish, like an Asian, and his eyes were deep and completely black, without sclera as described by the witness.

There were many scratches and bruises on his face and a couple of large wounds on his forehead and chin.

The top of his head was slightly downy and the hair almost white. The earlobes were one with the neck and resembled a shark’s fin.

The lips were wrinkled, narrow, and colorless. When he smiled reassuringly, which he did a lot, he revealed a row of small teeth in the upper as well as the lower part of his mouth.

The alien knew that they were studying him, and he said to them:

Internally, I am destroyed.

Somehow, the humanoid made them understand that he was badly injured and that he was already dying. Then he took out a small rectangular object with a slate pencil attached to it.

He wrote something on the object, and then threw it somewhere in the bushes and told lumberjacks not to touch it.

Don’t touch it. It will tell my fellow men what has happened so that they don’t come looking for me.

The witness claimed to have a 2 hour conversation with the alien. Suffering from great pain, the dying humanoid spoke to them and said that he had flown from the constellation Aquila which we call The Eagle, and that the Earth had been regularly visited by several cosmic races for many centuries. When only a few minutes were left for the alien, the humanoid asked the people to put his remains in a large bag, which he pulled out from his invisible pocket.

When I am dead, the light will disappear from my body, and with the help of the other 2 men you shall put me in this bag and carry me out into the river where I shall disappear. Then you shall rinse yourself thoroughly in the water so that you don’t get ill.

The witness said that before dying, he looked at him and smiled, and then he said words in an incomprehensible language and a few more words in Swedish:

You have come without any wish to and depart against your own wish. Our life is like vapor.

Then he said few more words, probably a prayer to his deity, and died.

After he died, the brothers did exactly what he asked. They put his dead body into the bag and carried him out to the river. The bag smelled like sulfur and burned their hands. They threw the bag into the river and then washed themselves.

Why the man decided to tell all this to Fontaine is not known, but he assured that it was all true and that he could even prove it.

According to him, the witness showed him a piece of metal which he found a couple of days later where this creature threw it. The rectangular object disappeared, but a slate pencil was laying in the grass. He did not give it for research and then did not contact journalists or ufologists, although his story with the artifact could become a real sensation on the pages of newspapers.