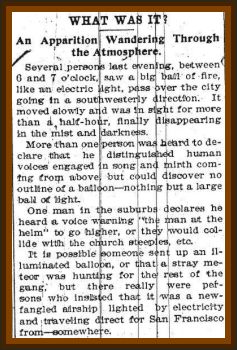 An Apparition Wandering Through the Atmosphere.

Several persons last evening, between 6 o’clock and 7 o’clock, saw a big ball of fire, like an electric light, pass over the city going in a southwesterly direction. It moved slowly and was in sight for more than a 30 minutes, finally disappearing in the mist and darkness.

More than one person was heard to declare that he distinguished human voices engaged in song and mirth coming from above, but could discover no outline of a balloon, nothing but a large ball of light.

One man in the suburbs declares he heard a voice warning:

The man at the helm to go higher, or they would collide with the church steeples.

It is possible someone sent up an illuminated balloon, or that a stray meteor was hunting for the rest of the gang, but there really were persons who insisted that it was a new fanged airship lighted by electricity and traveling for San Francisco from somewhere.