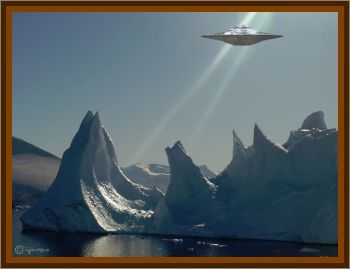 Brazilian meteorologist Rubens J. Villela and five other witnesses aboard the U.S.S. Glacier at about 6:15 on March 16, 1961. Villela was taking part in the United States Navy's Operation Deep Freeze. The sharply defined, egg shaped UFO traveled slowly from the northeast to the southwest at about 50° above the horizon on a straight, horizontal trajectory. Villela had the impression that its size was that of a small airplane. Straight, multicolored rays extended backward in a V formation from the front of the object. The colors changed continually but were predominantly green, red and blue. The object itself was reddish. It left behind it an orange trail which resembled a straight, hollow tube similar to a neon light.

Unexpectedly, the front and rear of the UFO split apart, forming two separate objects, each one identical in every way to the one original object they had been. As the objects changed from red to blue and white, they increased in brightness. Abruptly, they vanished.

The late Philip Klass, well known skeptic, cited this UFO as a good example of a case which can be explained in terms of plasma.

The late meteorologist James McDonald, however, argued that the highly structured nature of the object and the low cloud overcast present at about 1,500' were not compatible with Klass's hypothesis.