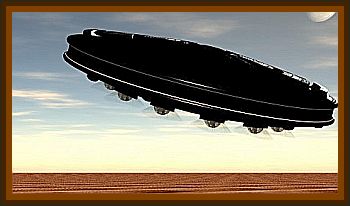 Reinhold Hering, a head forester in his 30s and sportswoman Erika Graef were hunting in Agsbach Valley when they saw a bright UFO appear from behind a pine tree.

With the naked eye you could clearly see the disk which gave off a brilliant light.

The strange object was in sight for 10 to 15 seconds and was estimated to be 180' in diameter.

Sketch of the UFO, made for the Wiener Kurier newspaper, by head forester, Reinhold Hering.

The following is an excerpt from this article:

Reinhold Hering, a head forester in his 30s, from Klausen-Leopoldsdorf in the Vienna Woods, and sportswoman Erika Graef had left Hering’s Volkswagen and were walking along a track over a grassy hill at Mitterriegel in Agsbach Valley towards a stand to carry away a roebuck shot by Mrs. Graef. Both had field glasses 10 x 50 and Hering’s 2 sporting dogs were following. Sunset had been at 7.29 p.m. CET, Central European Time, and a thunderstorm in the afternoon had cleared the air over Vienna.

At 8.45 p.m., Mr. Hering spotted a brilliant light behind a wooded hillock to his right. He called Mrs. Graef’s attention to it and they watched it through binoculars as it came out from behind a pine tree, much too slowly for an aircraft. Hering was dazzled by the powerful light, which was too intense to look at through the field glasses.

If you turn your binoculars into a halogen fog headlight at night, it will give you the same impression, Reinhold said.

With the naked eye you could clearly see the disk which gave off a brilliant light.

The thick body was somewhat tilted towards the witnesses. It had a dark surface with 3 lights.

There were 2 red/orange lights and an extremely brilliant one to the right, all calm and steady. The brilliant one seemed to come from a groove, like some kind of all round headlight. The red lights were not really lights, but red surfaces. It was the brilliance that caught my attention, otherwise I would never have looked at it. No aircraft would give that effect.

Klausen-Leopoldsdorf is directly below the flightpath of all planes approaching Schwechat, Vienna airport, from the west, so Mr. Hering is familiar with airliners.

The strange object passed over Agsbach Valley in a horizontal trajectory from the north to the northeast and was in sight for 10 to 15 seconds. It went behind the slope of Kreuzeck Hill, approaching the village of Sulz.

During the field investigation in August, 1972, They used a quadrant to find out the height of the object’s trajectory. Mr. Hering has considerable experience in estimating distances at night, during World War II he was in a special division for night fighting, and as a professional hunter he is often deer stalking in the vicinity.

The object was about 2 miles away from his location at Mitterriegel. They measured an angle of 4° elevation for the trajectory and computed a maximum altitude of 600' for the object above Hintcrriegel.

According to Hering’s estimate in the goniometric test, the thick disk had a diameter of 180'. As the object was in sight for 10 to 15 seconds and the real length of its trajectory, pine tree to Kreuzeck slope, proved to be 1 mile, we can assume a maximum speed of 480' per second.

After the sighting, the witnesses drove to Hering’s home in KJeinkrottenbach Valley where Hering telephoned the rural police station at AHand at 9:30 p.m. Newsmen got wind of the police report and Hering was ridiculed as the forester on a UFO hunt.

The Central Meteorological Station of Vienna announced that the object was not likely to have been a kugelblitz, ball lightning, or one of their balloons, but rather more likely a meteor. If we consider the facts about speed, height and structure of the object, this explanation has to be ruled out.

A second explanation came from the Vienna daily newspaper:

The UFO was a plane coming in to land.

Hering just laughed when that matterwas brought up during the investigation, and stated:

If a plane flies over Hinterriegel at that altitude, I’m sure the pilot will be fired immediately.

That is true. The object kept a flight level of 600' and Kreuseck has a relative height of 522'.