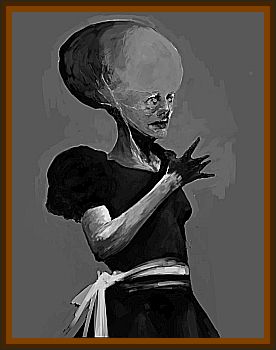 Jean Sibranoseian, was camping in the Morvan, not too far from Anost, night had fallen, when he saw something like a star falling from the sky.

Standing up in surprise, he saw, less than 130' away, a dirigible shaped object about 18' long & 6' high, in which were 2 pairs of lighted portholes, whose light varied curiously.

As he stared at it, petrified, he heard a slight sound and then perceived, about 15' from him, a man like creature taller than he was.

The being stepped down from a low stump on which he had been standing, and proved to be shorter than Jean, at most 5' tall, he came forward several steps, holding his hands out in front with palms upward.

Jean automatically did the same, upon which the being retreated very nimbly, hopping first on one leg, and then the other.

But within 10 seconds he came forward again, his arms now hanging, and stood facing Jean only 6' away.

He was human except for a rather large head with dark hair, and had large pupil less eyes in a very handsome, completely unlined face, which was smiling. He wore a blue/gray well fitted garment.

Jean smiled back at him, then, feeling foolish, he took out one of his visiting cards and offered it to the humanoid, who accepted it, still smiling, and slipped it into an invisible pocket. Then he backed away, again raised his lower arms to horizontal, and disappeared, with his hopping gait. Jean had no doubt that he had confronted a man from another planet.