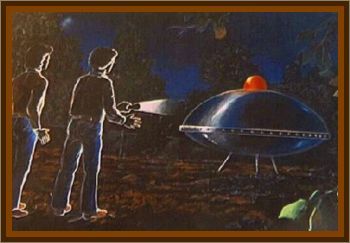 A total of eleven witnesses were involved and the incident took place at 8:00 p.m.

Mauricio Gnecco, 13, saw a yellow/red light moving from east to west. He was with a friend, Enrique Osorio, 12, and they were outside watching for shooting stars.

At first, they would not go, then when Mauricio insisted, they stepped out and watched the light which appeared to be at a distance of about 600'. Mauricio obtained a flashlight and began to turn it on and off as if to signal. At that moment, the light source approached the house at considerable speed and remained suspended between two tall trees about 150' from the farmhouse, where it hovered for about five seconds.

When this occurred, Mrs. Ortiz shouted to Mauricio:

That thing is coming down upon us, turn that flashlight off, Mauricio!

Mauricio described the object as between 4' and 6' tall, yellow/orange in color, with an apparent arc of light, or halo surrounding it, and two luminous legs which were blue, with green tips. It made no sound. It then flew to the right of the farmhouse and appeared to come low over a nearby hill.

Mr. Bermudez, described as the only person in the group who was unafraid, took the flashlight from Mauricio and went running in the direction of the object. His sister, Lucrecia, followed him, but in the darkness, she fell to the ground.

According to the testimony of the children and Mrs. Rosa Ortiz, Bermudez approached the area where the object was, and began calling the butler, who was the only other adult male present, saying:

Mauricio and Andres watched the object from a nearby hill and reported that it blinked on and off. Finally, they saw it rise high into the sky and fly away in the direction of Bogota.

Mr. Bermudez returned to the farmhouse and told the other witnesses that he had approached the object, which had landed on the ground, to within a distance of about 20'. The object, he said, blinked out momentarily and he shone the flashlight at it. He claimed that he saw a person inside and described the upper half of the entity as normal, but from the waist down, the anatomy of the person appeared to be like the letter A, and was luminous.

The object then blinked on, rose into the sky, and flew away.

About five minutes later, all of the witnesses saw an identical object crossing the sky at about 300' altitude. The speed was slow and constant as it flew toward Bogota and it also was soundless.

Two other adults, Clemente Bolivar & Rosalba Prieto, who live about two miles from the Bermudez farm, reported a bright orange/yellow light flying slowly toward Bogota at approximately the same time.

Within two days of the observation, Mr. Arcesio Bermudez, was taken very ill, his temperature dropped to 95° and he had a cold touch, although he claimed that he didn’t feel cold. Within a few days, his condition became far more serious, he had black vomits and diarrhea with blood.

A copy of the medical report signed by Dr. Esmeral, diagnosing the cause of death as gastroenteritis. Neither of the two doctors knew of Mr. Bermudez’s UFO experience which may or may not have some bearing on the case.

Mr. John Simhon, and Field Investigator Elias Nessim became aware of the UFO incident four days after Mr. Bermudez’s death, on July 16. On the same day, the children, Andres, Marina, Enrique, and Mauricio were put into a hypnotic trance by Dr. Luis E. Martinez of the National University of Columbia. The session took place at 8:00 p.m. that night and both Simhon and Nessim were present.

The hypnosis had been requested by relatives of the children.

The taped testimony of the children while under hypnosis is almost identical to the testimony already obtained, and to the testimony of the adult witnesses, with the exception of Arcesio Bermudez, who was dead and consequently was never interviewed. The investigators considered all of the witnesses to be of unquestionable integrity and honesty. Drawings of the object made by the children depicted a spherical object with a ring at the midsection and two legs jutting down underneath.

The possibility of animal reaction to the object is also a part of this reported incident. A pet monkey named Michin commenced to screech loudly and persistently, and several dogs around the farm began howling. This was reported by all of the witnesses. A visit to the farm by Simhon and Nessim yielded nothing more and they found no landing impressions.