Hovered Over The Naval Academy 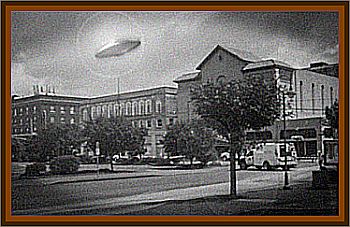 Three teen aged volunteers at the Waterwitch Fire Department early last evening saw objects they considered to be flying saucers, and an Annapolis housewife and Naval Academy employee who saw them agreed with the boys.

Agreeing with them was Mrs. Ethel M. Paul, 19 East Street, to whose house they rushed to get a better look. They looked like little dishes on which you would serve cake or pie, she said.

Harry F May, 65 year old Naval Academy employee who was sitting on his porch at the time at 24 East Street, also reported seeing the objects. He said there were only 3 of them, however, and their color was white. They looked like great big plates, Harry said. He reported that the objects appeared to be just fooling around and not making any noise. They were flying in a straight line, with one in front of the other.

But Mrs. Paul's 22 year old son, William A. Paul, who last year served seven months in the Air Force, had some doubts. It's pretty hard to say what they were, he mentioned. They were probably jets although I didn't see a vapor trail. I did think I could see the outline of the stabilizer. But they were so very high and far away it was difficult to say. They could have been 20 miles away. William advances the theory that the objects were probably brilliant reflections of the sun.

Chance said he called the Pentagon in Washington almost immediately after the boys saw them to report the findings to an officer concerned with unidentified flying objects. The officer made a check to see whether they were jets in the area, but James did not learn his findings.

Later he called back to check with Chance on any other persons who might have seen them. Chance reported that three of the objects were flying slowly in a line with one beneath it. The boy's attention was called to them at 7:57 p.m., he said, when they heard a roar and looked up to see the cause.