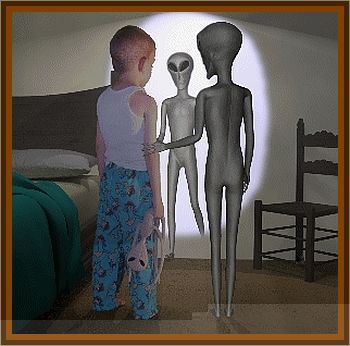 As Jason Andrews is celebrating his fourth birthday at his family's cottage near Slade, Green in Kent when the heavens open. As the thunder crashes all around, there is a single flash of lightning. Suddenly, a stream of numbers starts pouring out of Jason's mouth. Fantastic numbers, complex mathematical equations, even algebra...all from a boy who struggles to count to ten. Moments later the windows and doors begin to shake violently and the four year old announces to his mother, father and elder brother: They're waiting for me, I have to go.

Paul Andrews, his father, grabs his son and stops him from walking out into the downpour, but the boy struggles violently, and as he does so the house shakes to its very foundations, until finally, he seems to wake from a trance and the shaking stops. It is the first sign that Jason Andrews is no ordinary little boy and, in the eight years that follow, that is dramatically confirmed.

It wasn't until 1995, when he was almost 12, that Jason told his astonished parents exactly what had been happening to him...aliens had been abducting him from his bed at night. It's always the light that comes first, he confessed to his mother, Ann. Then I see the tall one rise up at the foot of the bed, suddenly there's lots of little ones everywhere. They're fuzzy and indistinct, and they move very fast. I can't move or speak, but I'm awake and I can see, hear & feel. I want to scream and run, but the sound doesn't come out and my body doesn't move. I hate them! I hate them!, the boy sobbed, but I have to go with them, They take me to an operating theater, like at the hospital. It's all white and shiny. Sometimes it's a circular room with a metal floor, It's always cold. They're there. The big one touches me but I don't feel it, like as if I've had an anesthetic.