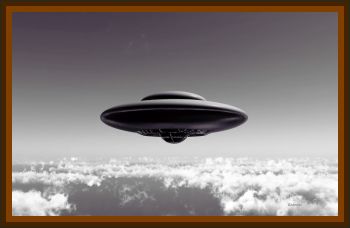 I was staying in a motel in Anderson, when my traveling companion burst in through the door to summon me outside.

Once in the parking lot, I gazed up above the rooftop to witness a great disk gliding gently across our field of view, moving slowly and tilted at an angle. It was slowly rotating clockwise and at so low an altitude, my guess is less than 1,000' to make identification easy, for me, being familiar with conventional aircraft design.

I knew right away that this aircraft was not a conventional Earthly machine, and instantly felt the rush of recognition of once again beholding a magnificent craft from a more advanced world, or whatever.

The last such time was 10 years before. It appeared simply as a great frisbee like disk with gold ball white spherical lights arranged around the rim and all touching each other, and one spherical red light of about the same size on the top center of the craft.

Within 5 minutes it had gradually moved out of view, having traveled in an arc, not in a straight line. It was as simple as that.

I only wished I’d been able to see it longer, and through binoculars. There was no sound, odors, or emissions. The time was 9:30 p.m., and the temperature was between 70° and 80°.