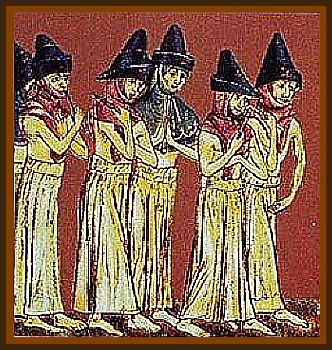 One Saturday for more than one half hour, 4 rather scared and separate peasants sighted, from different places in town, some 500 people performing a strange procession commanded by a handsome lady in white robes who carried on her hands a baby.

The charming woman and infant threw off a powerful light, which blinded the observers and illuminated the area like noon. The Señora was taller than her attendants, wore a glowing mantle with iridescent colors.

The picturesque parade was headed by 7 young men in white clothing bearing white crosses, followed by 20 clergymen, in two rows, praying aloud in some unintelligible speech.

Right after them went the lady and child with a man and a woman by the sides escorting them. Behind and clustered, came along some 300 men and women also in white garments. Finally ran a troupe of 100 individuals in white, armed with lances, beating loudly their pikes with each other. In the tail end of this staggering display, pursued many barking dogs.

When the crowd arrived at an open space behind the church, the imposing dame sat herself on a resplendent silvery throne in front of a luminous altar staged with red and white ornaments, while her companions sat down around her intonating chants.

Do not sleep and you will see good things.

This bizarre happening was the origin of a local sacred Marian cult that persisted for several centuries.