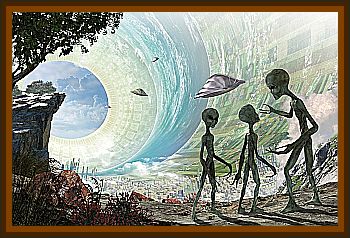 The reporter is said to be a woman, Mrs. S., who remained anonymous, aged 57, who saw an object already posed on the road at a mile from Amfreville la mi-Voie, on the road to Rouen parallel to the river Seine.

The object was said to be within 300' of her, of oval shape, gray color with no crutches or landing gear, with some kind of circular aperture slightly at its back relative to the center. The size of the object was estimated to be of 3' to 6' in height.

Near that object, the woman said she had seen 2 beings of probably not more than 3' in height, who seemed busy at something but the woman did not understand what they were doing.

The beings turned around as if they saw her then. They immediately rush to the object and got in by the aperture. The object took off silently and vertically up to 300' in altitude, remains motionless for a while, while oscillating, and then went away fast, à grande vitesse, taking the direction of the southeast.

While Figuet and Ruchon provide a digest of the report, Garreau and Lavier partially quote Mrs. S. saying:

While arriving at 300' of this thing, I stopped, and I rung my bicycle’s bell. 2 little beings stood up again, saw me. They rushed into their craft. The craft rose vertically up to some hundred feet. It immobilized while oscillating for a few seconds, then went away at fast speed.