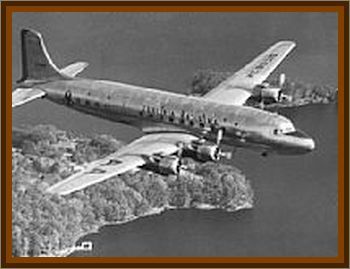 A very brilliant light was followed across New York State by an American Airlines plane.

The chase was described by radio to Air Force and civilian control tower operators.

The following account of the sighting is taken from a tape recorded interview program, 'Meet the Millers', On WBEN TV, Buffalo, New York, 8 days later, tape on file at NICAP.

Interviewers: Was that a regular flight of American Airlines?

Interviewers: From Buffalo to New York?

Ryan: This flight comes out of New York and lands at Albany, Syracuse, Rochester, and terminates in Buffalo.

Interviewers: What was your first idea that anything was happening, that you were seeing something?

Neff: This very brilliant white light, like an approaching aircraft with its landing lights on. Naturally we moved away from it thinking that's what it was. Then we noticed it was standing still at the time and we got sort of curious.

Interviewers: Just about what location was this?

Interviewers: A light? Now, when you say a light do you mean a light like a light bulb- about that color?

Interviewers: A big what?

Ryan: A large light. It looked more like a light coming into Albany airport.

Interviewers: And both of you saw it? At the same time?

Interviewers: How close were you to it, do you think?

Ryan: We turned a little bit to pass to the south of it, and we were probably 2 or 3 miles from it.

Interviewers: And the thing was just standing there?

Ryan: Just about standing; it was off our wingtip.

Interviewers: Was there anyone else on the flight with you?

Ryan: Oh, we had Miss Reynolds, our stewardess was with us.

Interviewers: Did she happen to notice it too?

Ryan: She came up. We called her and she came up and looked at it later on after this had taken off at this terrific speed from where we first noticed it.

Interviewers: How long was it stationary there?

Neff: We couldn't say that it was actually stationary.

Several talking at once

Foster: How fast would you say it appeared to be going? Did it change speed very radically during the time that you saw it?

Ryan: The initial speed I would say probably was 800 to 1000 miles an hour. How fast can it? It's hard to say, just to compute that speed.

Neff: Certainly much faster than another airplane would.

Interviewers: Faster than a jet?

Neff: Couldn't be a jet, not at that altitude because their fuel is so critical.

Foster: Did it appear to change color at all?

Ryan: Yes it did. It changed color after it got to the west of us, probably 8 to 10 miles. It appeared, the light went out, that's what had Bill and I concerned. It went out momentarily, and we knew there was something up there, and now here we were with a load of passengers with something on our course up ahead, and what are we going to do, so we watched this where the light went out and this orange object came on, this orange light.

Ryan: We looked at one another a little bit amazed, so we decided we'd call Griffiss Air Force Base, and I thought they had the radar on, And they didn't have it on, It would taken them 30 minutes to energize the set.

Neff: They asked us to keep it sighted and we did, and we kept calling out our location and as we told them where we were we turned all our lights on. They asked us to turn them off and they could see us, and they asked if this object you see is orange in color. We said it was.

Interviewers: This is after it turned on I understand?

Ryan: Yes. They said: We have a definite silhouette in sight south of the field.

Ryan: Now those fellas are observers who are in the tower. They said that they could see a silhouette.

Neff: Watertown could see it and they're quite a ways north of Griffiss, and Albany saw it, two men in the tower at Albany, one an Air Force man and one a CAA man. And they saw it after we first called them, and noticed, and they looked over to the west and saw it right away.

Interviewers: And when they saw it was it moving?

Neff: Well, we didn't get to talk with them.

Interviewers: But to you it was moving?

Ryan: It stayed just that far ahead of us, and they asked us what our point of next intended landing was, and 1 told them Syracuse, and they wanted to be identified, our aircraft, number and serial number.

Ryan: And they said: Well abandon that next landing temporarily and maintain the course and your altitude.

Ryan: So we did. They were calling scramble.

Neff: Well, it was low and it was also low for a jet. There happened to be an overcast that evening which eliminated the possibility of a star right off the bat, and ****(garbled) the way I understand it, a jet burns up three or four times the amount of fuel at low altitude than it does at high altitude. 1 don't think a jet could stay down that long with out using up a considerable amount of gas.

Interviewers: How fast were you going?

Neff: We trailed out as far as Oswego which is right on the south shore of Lake Ontario and we passed up our point of landing at Syracuse and we weren't sure we should hold the passengers up any longer, and of course we didn't advise them.

Ryan: We called them, Griffiss AFB, and they said:

Ryan: They were about off,

Ryan: And that was about 8 minutes and we couldn't work them any longer, and we turned over with Syracuse tower.

Ryan: And they were giving, relaying the messages back and forth, and it was then about 10 to 12 minutes and they're still not off yet. And we can't, I don't know, we'd probably still be flying. I just don't know where the jets were. Why didn't they get the jets up?

Interviewers: Well what happened to the object?

Ryan: It went off, it just went to the northwest and it went out of sight.

Foster: Was it more rapid? All of a sudden did it accelerate its speed?

Ryan: It did appear to, after it got over the water it appeared really get out of sight very fast.

Neff: It did, in the direction of Toronto, in that direction.

Interviewers: Was this object saucer-shaped or not?

Neff: There was no definite shape to it, it was just a brilliant light,