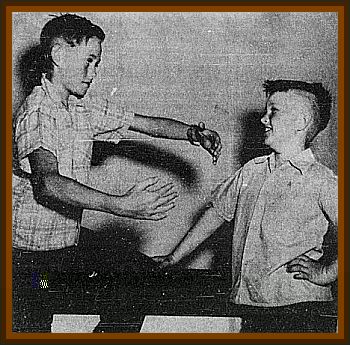 The first report of a UFO burning a witness seems to be this case from Texas.

According to the story, David Lightfoot, age 12, and his brother Charles age 9, saw an object land behind a hill, and they were able to walk up to it.

My fingers just barely touched it and it felt slick, sorta like a snake would. It was hot, too.

It sped off toward northeast, and after the encounter, David's face and arms became red with welts.

Later it was found out that Intelligence had made no investigation, apparently they believed the story had been made up to cover some childish prank which had caused the burns.

However, the man who told the world that flying saucers are real did not want to believe. In Flying Saucers from Outer Space, while discussing the Sonny Desvergers 1952 Florida Scoutmaster case, Major Donald Keyhoe noted:

There had been one other case where a saucer was said to have burned an observer. Two boys at Amarillo, TX, had reported seeing a small disk land near them, its top section still spinning.

When one boy touched it, the rotating part speeded up, throwing off a hot gas or spray. Then the disk took off with a whistling sound and quickly disappeared.

The boy displayed some odd red spots on his face and arms.