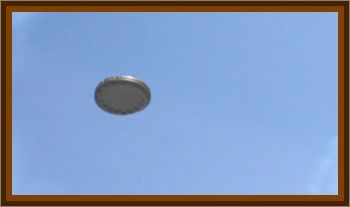 A manager of a truck stop at Highway 287 and Pullman Switch Road saw a stationary object in the sky that looked like the edge of a plate. The object then tilted and took on the appearance of a top view of a plate and sped rapidly away to the east at around a 30° angle upward and disappeared into the clouds. The observer estimated the diameter of the object between 30' to 70'.

At around 6:20 a.m. to 6:30 a.m. a 39 year old woman, a USAF nurse, a Major Hottinger, driving to work at the Amarillo AFB, on Eastern Street near Highway 287, heard a noise like a wind tunnel or tornado. She stopped her car and got out and looked around. She then saw a circular object in the sky to the east at an altitude of approximately 1000'. The object was estimated to be 50' to 60' in diameter. The Major drove east on Highway 287 with the object preceding her. After driving about 3 miles she stopped at the Shelly Truck Stop at Pullman Switch Road. She went inside and ask the manager to come outside and look at the object. The manager got into his car to follow the object with Major Hottinger following in her car. She continued to watch the object until she turned off Highway 287 north onto Spur Road and went to the South Gate of the Amarillo AFB where she works at the hospital.

At around 7:00 a.m. A/1C Joseph F. Winfield was on duty at the South Gate of Amarillo AFB when he saw to the northeast a yellow light or object with a red flashing light on top drop from a dark cloud, make a right angle turn, travel horizontally and then go straight back up into the cloud. Winfield estimated that the object was about 700' to 800' in altitude and the size of a semi-trailer.

This last one was in sight for approximately 5 or 6 seconds.