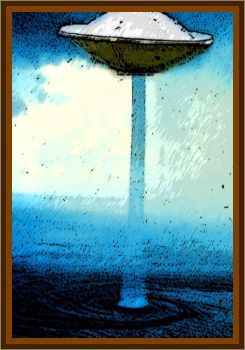 Jose Alves was fishing in the Pardo River on the evening when a strange craft came down out of the sky in his general direction. He later estimated its size as 10' in diameter and said it looked like two washbowls stuck together, lip to lip.

Too frightened to run, Alves sat transfixed as 3 little men, clad in white clothing and close fitting skullcaps, emerged from a window like opening in the side of the craft. Their skin appeared to be dark, but Alves could not get a good look at them because of the failing light. The little creatures took samples of grass, herbs, and leaves, and one of them filled a shiny tube with water from the river.

They then jumped back into the object, and it took off vertically and swiftly.

Alves was sure the men were devils, never having heard of flying saucers.

His friends and acquaintances attested to his honesty and sobriety and believed his story.