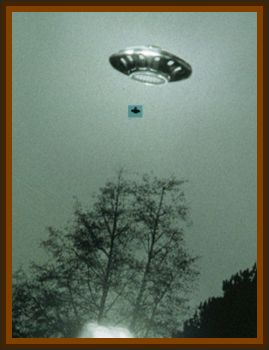 A large glowing circle shape. It came from our left from up in the sky and positioned itself in front of us.

It was probably ¼ of a mile from us still in the sky at about a 45° angle.

It hovered there, I can't give exact length of time, as we were all taken by what we were seeing, then a smaller object came out of it and hovered beside the larger object.

You could see sky between them. The smaller object then took off to the right and took a path to ground out of our sight. We were still focused on the larger object when the smaller one came back from the same path it disappered and hovered there beside the larger one and then went inside it.

By that time we had seen enough. We had been parked in a car, I was the driver, with my lights still off, I turned the car around, turned my lights on, and took off away from the object.

One of my friends in the back seat yelled:

I glanced back and so it was behind us. The next thing that happened was all lights, headlights, dash lights went out.

The car was still going. I was driving in the dark on a country road, I managed to feel the edge of the road and come to a stop. When the car stopped the lights came back on and the object was gone.