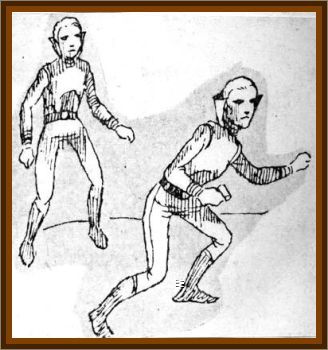 The residents of Alor Island reported encountering a group of six strangers on the east side of the island. The strangers were said to be about 6' tall, with a red hue to their skin and white wavy hair. They wore dark blue jump suits with long arms and high collars, a belt with a gray cylinder hanging from it, and black military style boots. They appeared to be searching for something.

During this time, it was reported that two people, a man and a six year old child, had been abducted. According to testimony given by the man, he was surrounded by the strangers who then paralyzed him using the gray cylinders carried on their belts. Although he could not understand their language, he believed that they wanted him to act as guide. His account states that they let him go after a short period. The child was later found unharmed but in a confused state.

Believing the stories to have been inflated, local police reacted with skepticism, but concerned that similar stories were emerging from villages located some distance apart, regional chief of police Alwi Alnadad visited the site where it was believed that the child had disappeared from. There, he and several fellow police officers are said to have encountered the strangers and fired on them, apparently failing to hit them even though they were at close range. Alnadad's account states that the strangers vanished almost as soon as they began shooting, leaving only a set of footprints that appeared to vanish after trailing for 15'.