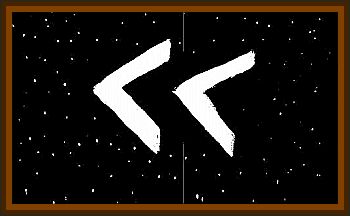 3 people could see by night a triangular flying object, with a kind of brightening V, 2 of them, in the direction on the flight.

My girlfriend, a Frenchman we met that night at the beach and myself were on the beach, by night, looking at the sea, talking as much as we could, the Frenchman spoke very broken english and, my girlfriend no English at all and I can not speak French, until 2:00 a.m.

At that hour of the night, we decided to go back to our camping place, just 600' away from that beach.

On the way back, I realized while looking at the sky that it was really a beautiful, clear and quiet night and asked the 2 other members of the group in spanish:

Hey, have you noticed what for a gorgeous night we have today? Please notice that the Frenchman could not have understood what I said, but he looked as well at the sky.

I was still finishing the sentence when I saw, coming from the right side, at an angle of about 80° a triangular object which seemed to say:

Now pay attention and look at me.

First of all, I had to think about the very first scene of Star Wars, where a triangular ship chases a small one. I had the feeling I was looking at one of those ships.

The thing flew just over our heads, without a sound at all, so that I could see that it was just like 2 boomerangs flying one behind each other, with the peak forwards so that I thought they were 2 sea birds, flying by night, but that could not have been, because I could not look thru the space between the first and the second sea bird, that means that it was just one solid body which was blocking my view.

After just completing a bow over our heads, it didn’t take more than 10 seconds, that thing disappeared over our left side, but with a kind of deaf lighting, a shining which surprised us still more than we were already surprised.

After a few seconds, my girlfriend was the first one who beat the shock and said with a brite smile:L

Have you seen that?

I could still not talk and all that the Frenchman could say was: