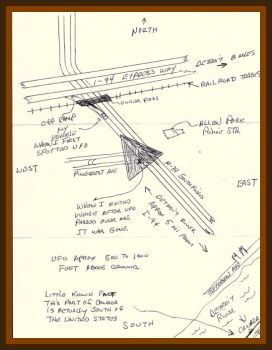 I received an e-mail from a resident of Allen Park, Michigan.

A phone conversation ensued and the witness described the following experience.

The man, herein known as Mr. J., is a jet aircraft mechanic of 30 years, and is currently employed as such.

He was driving home from the job at approximately 1:30 a.m. on the eastbound I-94 expressway and had exited onto M-39 South Field Road when he sighted, through the windshield of his truck, 3 very bright white lights ahead of him.

The object was unmistakably triangle shaped and extended beyond the width of both North and South bound lanes of M-39, at an altitude approximated between 500' and 1,000triangle.

Mr. J. said that his years of experience working around aircraft, including the military, left him with the feeling that this aerial object was not an airplane. The object passed directly over his vehicle and although Mr.J. rolled the window down and listened for a sound, there was no sound from the object.