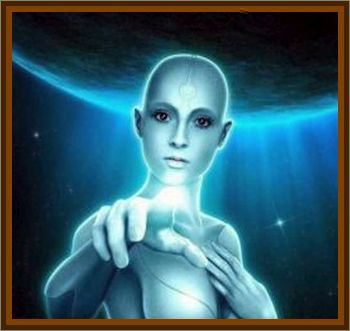 Several stories mention humanoid alien races with a blue skin. These usually refer to Andromedans. The Andromedans were the blue race that landed in Florida in 1954, trying to pursuade the U.S. Government not to work with the greys, but instead to join forces with The Orbin. Their advice was sadly ignored.

The Hopi Indians also talk about a race of blue skinned Star Warriors. There are several indications that lead us to believe these Star Warriors are the same Andromedans. The Sirius system is known, too, to be inhabited by a race that has a pale skin that approaches blue. Some dark skinned Vegan races have a hint of a blue hue in their skin.

Alex Collier mentions some Lyrans with blue skin, as well.

There also are several stories that involve a race of reptilian blue greys. These would be one of the races that have a permanent presence on Earth, in U.S. military bases.

Last but not least, there also are stories about a subterranean race of Earth Humans.

Chuck Roberts: A race of peaceable humans some 7' to 8' tall, with pale blue skin and large wrap around eyes which are extremely sensitive to light. These people may, according to some accounts, be allied to the Nordics and/or Blonds. They claim to be descendants of Noah who traveled to the Western Hemisphere a few centuries after the deluge and discovered ancient antediluvian cavern systems and technologies which had been abandoned in the subterranean recesses. They have been encountered mostly in deep cavern systems beneath the general region of the Ozarks/Arkansas and surrounding regions. Other sources tell of encounters with this same race in the Southern States of the U.S.A.