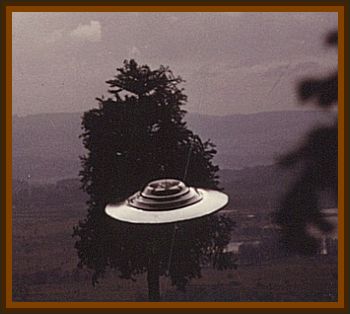 It was around 11:00 p.m. and I had just got to my friends house, and as soon as we get out of his car he points out a little red dot in the sky flying in the southwest direction.

And as soon as i said that it changes its flight path to the northeast then back to southeast and so it’s going back and forth and my friend and I are just puzzled.

We’re standing there staring at this object until it disappears in the blink of an eye only to return even closer in the same speed.

Now details were clear to make out, what seemed to be red lights spinning on the bottom as it rotated, the disk shape of the craft, and this was when I realized it was emitting no noise like a jet or helicopter would.

The UFO then, what seems like light speed travel, flies to the original spot of finding in an instant and just hovers.

It literally just hovered about half a mile away from me. Then it turned on its side and did a barrel roll or flip while hovering in the exact same location. No noise, no flashing lights like planes and helicopters have, no wing like appendages, Nothing.

This breaks every rule of aero dynamics to my knowledge. As we’re standing there talking about it the moment felt like it was over in an instant once it darted out of view in an instant again.

I’m sorry for the lack of evidence, but I took a video on snapchat that night that I didn’t save only because you couldn’t actually see the craft in it due to the darkness and quality. I now realized the video could’ve backed up my claim to see it at least since you could hear us freaking out and saying:

You can’t even get it on camera it’s moving so fast. This story is 100% real, I believe what I saw was a UFO wether it be aliens or advanced technology made by the government.