Motorist Sees Humanoid Being from UFO 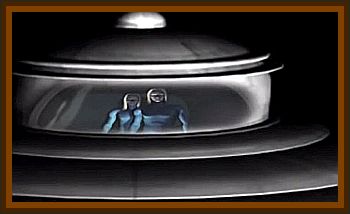 Businessman Pablo R. was returning from a late meeting on an isolated curvy road when he sees an intense light up ahead and immediately thinks it is another vehicle with its high beams on.

The light is hidden behind a hill and moments later it again re emerges, still shining intensively. He was surprised at the shade of light which wasn’t white but very bright orange in color. The light disappeared again at a curve and then it appeared again, this time very close to the witness. The witness then slowed down in order to see the light better. At this point he realizes that the light is shaped like a disk and is huge.

The huge bright orange disk was on the left side of the road. The witness then decided to accelerate his car and drive away from the area as quickly as possible. But at that same instant the orange light dimmed and at the same time the car engine began sputtering, his headlights shut off and the car came to a complete stop in the middle of complete darkness.

He came to a stop and could not see anything around him, even the orange light was now gone. Moments later Pablo heard a strange voice calling his name from the darkness. Terrified he began to tremble, it was the only time when he felt fear thinking that he was going to be a victim of highway robbery.

But he realized that the voice was calling him by his name, he thought that it must be someone he knew and in the darkness he now could see a tall, human like figure, about 4' in height, maybe taller. The figure wore a tight fitting semi transparent coverall, which the witness thought was strange since it was very hot. The figure’s face was normal in appearance except for large luminous slightly slanted eyes. Immediately the witness felt a sense of peace and tranquility as he and the stranger established a telepathic conversation.

Using the telepathy the tall figure confirmed to the witness that he was an extraterrestrial and meant him no harm and was on Earth on a peace mission.

The extraterrestrial told the witness that Earth scientists did not know about his planet since it was in a dark zone in which telescopes or other types of equipment were unable to reach. He added that using our fastest spaceships it would take humans hundreds of years to reach his planet using our outdated technology.

They traveled using a concept that did not deal with speed or distance and was totally incomprehensible to current Earth physics. The surprised witness then pointed out that the visitor was human in appearance, the extraterrestrial smiled slightly and said:

Of course, in our planets we are all humans just like you. There are certain anatomical differences but they are slight. However what makes us much difference from Earthlings is not the physical matter but the inequality of our evolutions, first mental and then astral and spiritually.

The extraterrestrial added that humans were still evolving in the physical plane, but were in the brink in initiating a mental and astral evolution and then spiritual evolution which will change humanity forever. But he then added that we were still a long way from this threshold.

The witness then asked if there were other different extraterrestrial civilizations, the stranger said:

Of course there are, many come in peace others to observe and others are not our friends, since the forces of evil and good exist throughout the cosmos.

Later the extraterrestrial added rather cryptically:

I am authorized to answer most of your questions, you see my contact with you was very carefully planned, take it with calm, remember the time factor doesn’t matter, this exchange will take only a few minutes of your time, you can ask all the questions you like, if they are concrete I will attempt to answer them.

The witness then went on to ask numerous questions, like why they didn’t pick some important politician to contact, the extraterrestrial told him that politicians were not in their interest since they did not act in a spiritual manner.

He added that his planet was governed by a council consisting of their most adept and intelligent of their species, it was sort of a one planetary government.

The witness then asked if they believed in God, the extraterrestrial said:

Yes but we discard the anthropomorphic concept which humans developed.

He then insisted that the witness did not ask any more questions about God since he was too high up to talk about him. He then added that humans only needed to love God.

The witness then asked which planets in our solar system had life, the answer was that eons ago there had been life on Venus, Mars and even on our moon.

There still remain many hidden bases on those planets some of which have been detected by our astronauts and kept secret. The stranger also added that there was an advanced civilization on Jupiters moon Ganymede, which was similar to that of Earths and was striving to make contact with humans.

He also added that Neptune contained a hidden civilization which was impossible for humans to see. There were countless inhabited worlds in the known universe which they knew, they had counted more than 120,000 so far, many less advanced than that of the human civilization.

The witness then asked the inevitable question:

What happens when we die?

The answer was surprising, There is no absolute death. The different religions on your planet explain it very capably, although with essential differences. The witness then asked:

Who was Jesus Christ?

The answer, Somebody who you have not yet totally understood?

How can we understand him better? asked the witness.

Just try to understand this, his main message was one: Love, which is the way, the spiritual way, was the answer.

The visitor then added, humanity should not fear us, they should only fear themselves, thats were the danger lies.

At this point the witness insisted in a clarification of the statement but the visitor remained silent.

Upon asking if there were extraterrestrials of difference appearance from that of humans, the visitor said, that evolution has not been equal throughout the Universe and there exists some marked differences in some species.

The visitor then spoke about his home planet:

Our planet has been inhospitable for thousands of years now. A thick slab of ice several miles thick covers it. But our ancestors managed to survive and under extreme hardships overcame the abstractness of matter and cosmic evolution, in that way we have been able to build vast gardens on the ice and build huge underground cities, in which there exists neither heat nor cold. Their main source of energy was a white form of cosmic energy which they called Abuchal.

Finally the witness asked the visitor his name.

My name is Naazra-Abuc. I am the second in command of the craft that you have seen. Forgive us for disabling your vehicles electrical system, it is a simple method which Earthlings will soon learn how to use.

The witness said that no one will believe his story, but was told by the visitor that only he had to believe it. Moments later the figure disappeared into the darkness and minutes later the witness saw a large luminous disk rise into the sky and disappear to the witness. The witness’ vehicle then started and he noticed that it was now only 2:33 a.m.