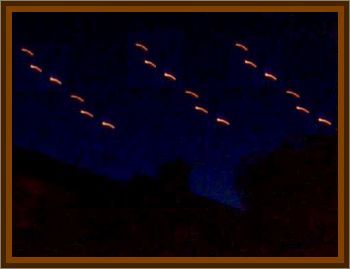 The event was observed by the National Observatory in Bouzareah, Algiers and reported in the Algerian El Moudjahid newspaper the day after.

Not sure which day of the month it really was, but at about 9:00 p.m. in January of 1970, I was playing soccer with my brother when a fleet of UFOs crossed the sky right abbove us.

There were bright orange, very luminous but the source of light could not be seen, they were rectangular, almost square with rounded corners. They each had a small flame in the back. They were large and were flying at a relatively low altitude about 1000' I would say.

They were quiet, no sound, flew from one horizon to another in less than 2 minutes. They were flying all at the same constant speed, in a very organized way. They were flying in rows of 5 or 6 and basically were forming a matrix like unit. There must have been 3 or 4 dozens of them, may be more.

The most striking thing was that some of the ships in the last row would come out of the fleet perpendicular to the fleet, still moving at the same pace as the fleet, move forward with amazing acceleration, and get ahead of the pack sideways inward to form an element of a newly formed first row.

Basically the trajectory was linear and never did it curve, but rather changed directions at right angle.

The next few, I kept observing the sky and there was a lot of activities.

One time I saw bright spots moving in the daytime sky. Some of those would be still, and then accelerate very fast toward space and their visibility would fade.