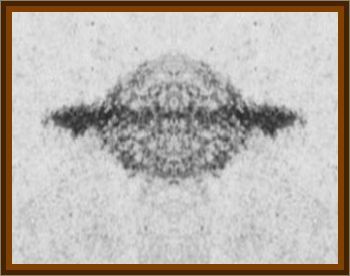 John R. Townsend, Special Assistant for Research & Engineering to the Asst. Secretary of Defense, saw a large stationary sharply outlined Saturn shaped silvery or aluminum clad oblate spherical object, with gossame surface appearance with a rim or girdle around its equator in clear sky due S azimuth about 180º at about 20º elevation for about 10 seconds, which started rapidly rising at an estimated speed of 1,000 mph and disappeared due to extreme distance at about 30º to 35º elevation still due S after 40 seconds, with the impression it was heading away from him to the S growing smaller until unable to be seen, apparently increased distance to at least 400 miles to drop below minimum visual resolution, at about 36,000 mph average velocity at 80 g's acceleration to an altitude of about 200 miles, terminal velocity about 72,000 mph.

Townsend was familiar with standard takeoff pattern of flights from Washington National Airport and said that the airliner he saw during the sighting headed S on a track about 1 mile to his left, along the Potomac River, and then turned right across his field of view of the object.

Pilot of Capitol Flight 407 took off in a DC-4 at 5:59 p.m. EDT from Washington National heading S and climbed to 2,000' and as he was turning right to a W heading out of the traffic pattern, at about 6:02 p.m., he saw an unidentified aircraft with a nose light at about 3,000' heading N, seen in the direction of or over Beacon Field 3 miles to the W, at about azimuth 265º so object was in the glare of the setting sun at approximately elevation 7º azimuth 258º and may have been reflecting the sunlight so as to appear to have a nose light.

Thus sighting lines crossed with Townsend at right angles, establishing distance and location of object by triangulation as 2 miles S of Townsend at about 3,000' altitude and 1 mile W of the airliner, or at 38º46'N, 77º 3'W, and thus actual size as about 500' and angular elevation to Townsend about 17º in close agreement with Townsend's measurement, done by protractor after the sighting, and in exact agreement with pilot estimate of 3,000' altitude of object. No sound.

Townsend reenacted the timing by walking the half block down the N-S running Lee Street, which runs toward 190º True azimuth. Projected target radiant at ascent angle of about 30º at about azimuth 180º is at 17 hrs Right Ascension -20º Declination.