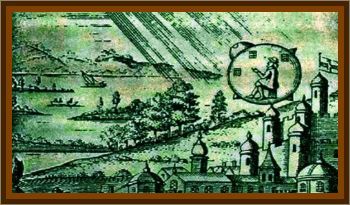 At 5:00 a.m. several farmers caught sight of an enormous globe which seemed surrounded with flames.

First they thought it was perhaps a balloon that had caught fire, but the great velocity and the whistling sound which came from that body caught their attention.

The globe slowed down, made some oscillations and precipitated itself towards the top of a hill, unearthing plants along the slope. The heat which emanated from it was so intense that soon the grass and the small tree started burning. The peasants succeeded in controlling the fire which threatened to spread to the whole area.

In the evening this sphere was still warm and something extraordinary happened, not to say an incredible thing. The witnesses were two mayors, a doctor and three other authorities who confirm my report, in addition to the dozens of peasants who were present.