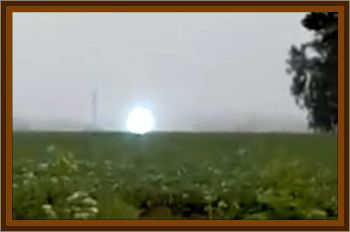 Two of us were driving west on Colorado Hwy 160 toward Alamosa. The road is called the gun barrel because there is a stretch of about 15 miles that is completely straight.

My friend, who has a private pilot's license, saw an orange light directly ahead of us and pointed it out to me. We watched it fly north for about 5 minutes before we stopped the car to get out and have a clearer view. After a few minutes we continued to drive west and watch the light. It would occasionally change from orange to green, and then back to orange in a random sequence. We stopped the car one or two more times to try to figure out what it was.

After about 20 minutes the light was approaching mountains that are west of Alamosa, still travelling north. With the mountains as a reference we could estimate size, height and speed. We guessed that it was 200' long, it had taken on a cigar shape as we got closer, about 1000' above ground level, Alamosa is at 7500' above sea level, and traveling at about 200 miles per hour.

When it was very near the mountains we suddenly saw a blinding white light and then it was gone.

After we checked into our hotel rooms we went into the hotel restaurant. As we talked about our experience we wondered how many of these kinds of things are seen and never reported. It was 6:00 p.m. or so when we decided to call the local newspaper.

The editor happened to answer the phone. When we gave him an overview of our experience he asked if he could come to the restaurant and interview us.

Before he arrived I went to the hotel desk for a Colorado map. We marked the map with a line showing where we thought the UFO traveled as we watched it.

We told him what we had seen and he took copious notes without asking many questions. When we were through he said: Now let me tell you what other stories I have heard.

He then told us about reports from many local citizens including close encounters. I recall one of the events he told us about was an elderly lady who reported a huge UFO that hovered just above her house for several minutes.

He made it a point to make sure we understood that the other reports were from very credible people.

The story about our sighting was reported in the Alamosa newspaper the next day. My crew was in the area examining two national banks for two days. We regretted telling our story because we took a lot of grief and ribbing from bankers and other citizens. As we were checking out of the hotel the owner/manager asked us if we were the bank examiners who had seen the UFO. We were very defensive by this time, but admitted that we were the people mentioned in the newspaper article.

She then told us this story. Her 8 year old daughter had been visiting a friend's house the day of our sighting. Her daughter called the police to report a military jet that she saw shot down. She said that it was chasing a light and the light shot out a light that knocked the airplane down. Then she came home and told her mother what she had done. The mother told her that it was not right to make false reports to the police and that she was in big trouble.

When the police showed up at their home to make sure everything was o.k. The police and her mother told the girl that if an airplane had crashed, there would be search parties out looking for it. Now, here is the part that makes me believe that this was a true report of what the girl saw.

She said: If they find it, can I have it, because I saw it first? I met the girl briefly and asked her to point in the sky where she saw the light and the airplane. Her line was shorter than ours, but ended in the location where we saw the blinding white flash.

I have decided to report this again just because I am old enough now that I don't care what people think. I have searched for the article and have not been able to find it. I was not even sure which year it was until I remembered that the well known case of Snippy the horse occurred about 2 to 4 weeks after our event. The Snippy event was September 7, 1967 so our event would have been sometime in August, 1967.

If you have a way to access the Alamosa newspaper you will find our story there. I would love to have a copy of the article if that is possible.