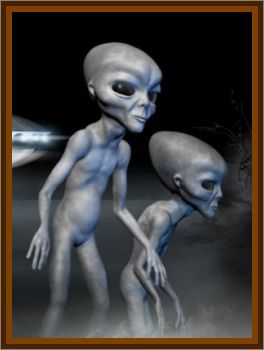 A single witness case, this report was made by a man who is described by his acquaintances and friends as a very simple man, 50 years of age, grown old prematurely by hard labor in an open forge.

Until his observation, he absolutely did not believe in the UFO phenomena. Even his family, after being told of his experience, showed no interest, and his wife and 2 sons did not even bother to go see the place or the landing traces on the ground.

After his experience, the witness, John G. Doe, proceeded on to work, where in response to questions, he revealed the details of his encounter with strange humanoids. As a result, he was ridiculed and became the object of unsettling raillery and ultimately became quite depressed. Consequently, when the experience came to the attention of researchers, the investigation was made quite difficult because the witness did not want to talk. Eventually, he consented to an interview and the investigators learned the following:

At 5:30 a.m., John left his home and took the road, State Route 38, then called RN 363, to Origney-en-Thierache, Aisne Province. He passed the last houses of the hamlet of Routieres and took the curve just before the bridge over the Thon, a river between Oise and Etreoupont, seeing nothing but that part of the roadway illuminated by his headlight. After crossing the bridge, he was stopped and was nose to nose with two UFOnauts, as he called them.

The man was stupefied and did not understand what had happened, so he asked them how they had stopped him since he had not slowed down or braked. He then noticed a large dark mass, circular, to the left in the grass below the level of the road about 3' 3" and about 110' from him and immediately thought that this must be their ship. He noticed nothing else, no signals, noise, absolutely nothing except the dark circular mass.

John had put his feet on the ground to keep his balance, the 2 figures were standing facing him on each side holding the handlebars, and it seemed that they were watching him. They appeared about 5' 6" tall and wore dark uniforms like an astronaut's, including a helmet with an opening for the face, but nothing could be distinguished because it was dark inside and it seemed as though their faces were covered. No other details could be made out, except that the gloves had 5 fingers which were joined to the suit at the shoulders.

John later estimated the height of the object in the field as 6' to 6' 8" and was as large as 2 cars.

The UFOnauts, after stopping the motorcycle, made very expressive gestures which John described as resembling human, and seemed to be telling him that they needed food. He panicked.

The UFOnauts were looking at each other, turning their helmets. Then the one on the left made a sign to the one on the right and John saw the latter search with his hand behind his back for something which John could not see. Then, this being showed a morsel of a substance of about half an inch on the palm of his right hand and made new signs with his left hand, seeming to indicate that John should eat what he was offered.

Completely panicked, John grabbed the material, which seemed like a bit of chocolate, put it in his mouth, and ate it. The substance had no taste and was of a softer consistency than chocolate. The entities watched as he ate, then when he was finished, they let go of his motorcycle and he left as quickly as he could.

Upon questioning later, the man could not tell whether the engine of his cycle had been stopped or not, and being glad to get out of the predicament, he did not come back, nor did he ever look back as he made his hasty departure.

The investigation of this case was carried out 2 months after the fact and inspection of the area where the dark mass had sat revealed nothing. However, neighbors and friends who went to the area after hearing John's story said that they had found an area which was circular in shape in which the grass had been flattened or compressed. This area measured 13½' to 16½' in diameter.